Rink Tum Tiddy, an alliterative name that sounds straight out of a Rudyard Kipling or A.A. Milne poem, is the subject of today's post. I've been curious about this eggy saute since I was the volunteer typist for a fundraiser cookbook "Country Cooking" (1990, Saratoga County Affordable Housing Coalition) and received this interesting sounding recipe from a Gretchen Z. at Legal Aid.

Also spelled Ring Tum Diddy, Rum Tum Tiddy, and variations in between, this dish is a kissing cousin of Welsh Rarebit and I found recipes in several vintage cookbooks. "Rum Tum Tiddy" is an entry in the 1965 edition of the Fannie Farmer Cookbook, in which it is described as "especially good for the teen-age crowd", and consisted solely of tomato soup mixed with melted cheese and a little seasoning. A 1945 edition of the same cookbook has the same recipe, only a beaten egg is mixed in at the last minute.

In a 1973 edition of the Joy of Cooking I found a recipe for Tomato Rarebit, also known as Woodchuck (more silly names!), which called for a concoction of tomato soup, onions, cheese and separately beaten egg  yolks and whites served over toast or crackers. Older cookbooks I consulted did not have recipes for anything tomatoey, eggy and cheesy, so I suspect this may have been one of those Depression Era comfort foods that arose and fell during the mid to late 20th century.

I like the heartier version of Rink Tum Tiddy Gretchen provided as it's got a bit more texture and vegetable heft.  It's a quick recipe and a tasty, if slightly messy, one too. It certainly was an inexpensive brunch for us this past week, piled onto one of Dan's tender Buttermilk Biscuits. It reminded me of an inside-out Western Omelet, and could certainly be changed with different seasonings and vegetable ingredients to suit a variety of tastes. 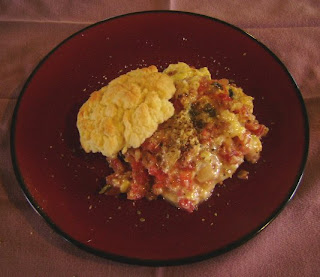 Gretchen's recipe was a little vague on certain points (to stir up the eggs for the final cooking or let them steam cook a la a frittata?) and left out some measurements (or was that the fault of the typist? I'll take responsibility there) for ingredients later mentioned in the cooking instructions, so I've adjusted things a bit in the recipe below:

Melt butter in a heavy skillet. Add peppers and onions and cook until softened, about 7-10 minutes. Add tomatoes and cook, stirring occasionally, another 5 minutes. Add in cheese and let melt. Pour eggs over all and cook over low heat, letting eggs set on top and gently prodding around the edges with a thin spatula to keep bottom from browning too much.

Serve hot over a toasted biscuit or bread. The juiciness of the Rink Tum Tiddy will soften the underlying bread quite nicely.

I'm linking up this satisfying mess of cheap eats with:

Love this post. I'm always fascinated in food history (or food from decades past, even within my own lifetime).

I've never heard of Rink Tum Tiddy, but the name is great -- perfect for a little one who might be a bit fussy about eating.

Sounds sort of like piperade - but anything with cheese and tomato and egg is OK by me! And the name is fantastic!

Both recipe and name are very new to me. Thank you for linking with Any One Can Cook :)

Heard of the name but it was the name my grandmother called a dish she made with browned ground beef, cooked pasta and tomato soup