A spot of tea and a spicy bite of parkin, an oat-laden gingerbread from England's Yorkshire country made our windy and cool (some might say parky) summer afternoon extra special. I made this English tea-time treat in celebration of Elizabeth Goudge's well-loved juvenile fantasy book, "The Little White Horse". This book is the current book selection for Cook the Books, the online foodie book club that was started last year by me and my bibliophilic blogger friends Johanna of Food Junkie, Not Junk Food and Deb of Kahakai Kitchen.

For each bimonthly round of Cook the Books we have chosen a book to read and then ruminate upon for culinary and bloggity inspiration. We have previously read and blogged about Sicilian cuisine for Lily Prior's novel "La Cucina", explored Middle Eastern food for Diana Abu-Jaber's delicious memoir "The Language of Baklava", and cooked up delights for bad boy chef Anthony Bourdain's book "Kitchen Confidential". 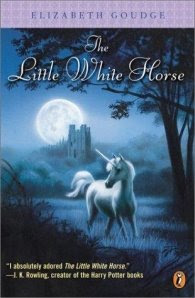 It was my turn to host Cook the Books again and so I thought to change things up a bit. Goudge's book, "The Little White Horse", is our first foray into the world of juvenile literature and fantasy and I found it to be a delightful escape into a world of coziness and comfort. Goudge's writing reminded me of my youthful devouring of George Macdonald's Curdie series and of reading C.S. Lewis' wonderful Narnia series as an older reader. Having similarly swallowed the Harry Potter series whole in reading them to my children (and reading ahead) I can see where author J.K. Rowling drew inspiration from Goudge's book, self-described by Rowling as one of her childhood favorites, for the mouthwatering Hogwarts feast scenes and tremendously sensual descriptions of train carts full of a vast array of Wizard sweets. I had thought that these feast scenes and colorful, descriptive character names were straight out of Charles Dickens' canon, but after reading "The Little White Horse", I sensed the inspiration from this jewel of a novel and imagined the young J.K. snuggled up with it, reading and re-reading it during wintry Scottish blizzards.

The litany of English baked goods which emanated from Moonacre Manor's castle kitchen was what most intrigued me about Goudge's book. I enjoying researching fairy cakes, rock cakes, syllabub, and other tea-time treats. I decided to make a Saffron Cake, the culinary history of which is amply described in this blog post. I had some saffron in the spice cupboard which was fairly well aged from having been purchased for some special recipe of distant memory, as well as some leftover rosewater from another kitchen experiment, so I thought I would take a stab at this recipe for Golden Saffron Cake. 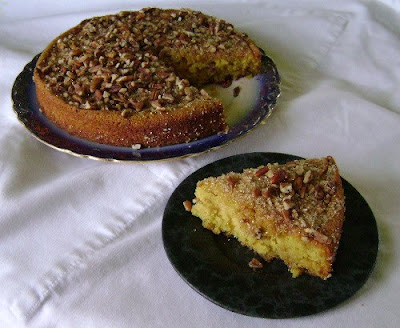 Alas, in my attempts to convert this recipe to a gluten-free version and in perhaps having elderly saffron threads, my Golden Saffron Cake, though rather smart looking, turned out to be medicinal tasting and in my husband's words, like something that had been stashed away in Aunt Tilda's drawer of undergarments, next to the packet of moth balls. I don't even want to think about an elder Auntie's niceties when I'm noshing away. Or at all, for that matter. The cake had a lovely crumb, but it was inedible, and its golden remainder was handed over to our trusty kitchen hound, Martha, for disposal. So back to the Crispy Kitchen I went to figure out something else for the Cook the Books post.

End of the school year madness got in the way, however. With two active teenagers around, there were music concerts to attend, softball and soccer games to squire the young 'uns to, academic awards ceremonies (not to boast (too much) but those Jag girls are brains, don't you know), sports banquets, gardens to plant, etc., etc. So my culinary artistry was stymied by various time constraints, so I do beg everyone's pardon who was waiting for the Cook the Books hostess to get with it and post already.

At last I found some unencumbered hours to spend by my oven, and decided to whip up some parkin. Parkin is a chewy gingerbread traditionally made in England's North Country with oats and plenty of ground ginger, then stashed away to ripen until it is sticky and moist. Again, I had to make my Parkin gluten-free, so I made a few adjustments to this recipe, and we enjoyed a square of parkin recently with a nice cuppa and a dollop of buttercream to fuel us up for an afternoon of yard work. 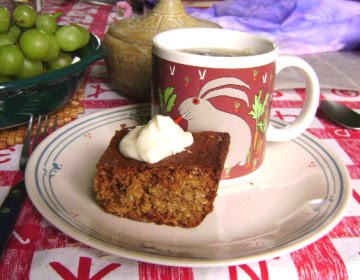 Here's my adaptation of a hearty Yorkshire Parkin recipe:

Grease a 9 x 12 glass baking dish with shortening or butter.

In saucepan, heat together butter, brown sugar, molasses and corn syrup until butter is melted and sugar grains are smooth.

Bake 45 minutes or until toothpick inserted in center of pan comes out clean.

Cool completely in pan before serving. Ideally, parkin can be aged at room temperature in a closed tin least three days to one week before consuming, so that it has a chance to ripen and soften.

Makes about 15 squares of parkin.

I am delighted to report that Deborah Gaudin, of the British Elizabeth Goudge Society, will be judging the submissions for this round of Cook the Books after the June 26 deadline and can't wait to see what everyone has come up with. Be sure to check back at the Cook the Books blog to see our roundup of tasty "Little White Horse" inspirations.
Posted by Rachel at 6:12 PM

I absolutely love this idea! I have been to your blog before but recently added you to my feedreader and, naturally, came across this post. An avid reader, I love that you've combined books with cooking. Also stopped by Cook the Books. Can anyone join in and participate? Thanks for sharing!!

Amy: Thanks for your kind comment. I should have noted in my post that anyone can join in the fun with our little group, Cook the Books. You just read the designated book, cook up something inspirational and blog about it, so feel free to join us. For the next round, we are all going to read Nicole Mones' novel "The Last Chinese Chef".

Love your post--it is so well written and the parkin is lovely and looks perfect with a cuppa tea. It was one of the foods I was interested in learning about after seeing it in the book. I almost did a saffron cake too but after your hubby's description. I think I am glad I didn't. ;-)

I love that you made parkin. I had looked into recipes for it when choosing my entry and ultimately decided not to make it because my family doesn't really like gingerbread...and I didn't want to eat the whole thing by myself. Way to pick yourself back up after the saffron incident and a great review!

I find saffron hard to judge: too little and you wonder why you bothered and too much tastes like something from a medicine bottle.

Rachel, your post gets an A+. So sorry about your saffron cake--it looked beautiful. If we'd read The Little White Horse during the winter, I'd have probably made parkin, too. I love gingerbread, and recently made a shortbread that contained oats and was yummy, so the recipe is appealing. Glad school is almost over.

It looks beautiful, for sure!! I have to hurry!!!!! I'm gonna be squeaking in last minute...

I almost made the Parkin myself, but decided against it as it felt a bit stodgy. It looks wonderful though! I also posted my Cook the books entry today.

unfortunately, i wasnt able to take part in this round of cook the books (but i will be taking part in the next two, i promise) - this books sounds like a winter project for me

parkin, one of my favorite old fashioned cakes from my years in new zealand, lovely touch to it

What an absolute tragedy that the saffron cake was awful! It looks so pretty!

But your parkin more than makes up for it. In England, parkin is traditionally eaten around Guy Fawkes Night (5th November), so I might wait until then to try this recipe.

I'd like to enter my post, but can't seem to find where to send it. Can you help?

Hi, I enjoyed reading your post, the book looks interesting and i am going to look it up. I love parkin, my family is from Yorkshire so I grew up with my family baking it! I still eat it now and my mum and i make it, although we dont live in yorkshire. It is usually eaten around october/nov, but I could eat it any time! ha,ha

I enjoyed entering, after finding where to send my post. Sometimes I'm not thorough enough reading directions. Which can get you into trouble cooking.

Great choice with the parkin. I had jotted it down to research what it was and almost made it. Glad that you did, and so well.

I am still laughing about your husband's description of he saffron cake - hilarious, and there is really nothing to do but laugh when something like that happens. Hope the delicious looking parkin made up for it. And thanks for hosting.

Parkin! I had to look it up, when I first encountered it, since I didn't know what it was. Sorry about the mishap with saffron. I hope it won't keep you from using it again in the future.