In Which I Become an Outlaw Cook with John Thorne

Running a used bookstore for the last fifteen years has educated me about which books are treasured, or perhaps guarded is a better word, by their owners and hardly ever relinquished back into the market. I rarely get any books in the shop about blacksmithing, stained glass or rare coins; such classics as To Kill a Mockingbird, Catch-22, The Cat in the Hat and Gone with the Wind don't show up to be traded; and works by a select group of authors and illustrators like Shirley Jackson, W.H. Auden, Edward Gorey, Kurt Vonnegut, Tasha Tudor and Philip K. Dick are seldom brought to our doors.

Add food writer John Thorne's books to this elite list. I was first made aware of his work many years ago by my bibliophilic friend Myra, who asked me to keep an eye out for Thorne's books. After at least a decade, I had yet to find any such titles in my shop or out book hunting, until one day when I was on a holiday in Great Barrington, Massachusetts at Yellow House Books, and spied a copy of  Outlaw Cook (NY: Farrar, Straus, Giroux: 1992), a collection of food essays written with his wife Matt Lewis Thorne. I snapped it up and devoured it with great pleasure over the next several weeks and am waiting to savor another of his books, Mouth Wide Open, which is at the top of my bedside room reading pile.

Now I know why Thorne's books never show up in the shop. They are to be savored and reread, bookmarked and propped open on the kitchen counter, and reread again. I chose Outlaw Cook for the current round of Cook the Books, the online foodie book club started by me, and two lovely blogger friends: Deb of Kahakai Kitchen in Hawaii and Johanna of Food Junkie, Not Junk Food in Greece.  For this bimonthly blog event, participants are asked to read our chosen book, blog about it and cook something up that is inspired by our reading. Anyone can join the "regulars" in this book club by posting and then leaving a comment at the Cook the Books site. The deadline for this round is January 23, 2012, and I am delighted that our featured author, John Thorne, will be reviewing the submitted posts and picking a winner to receive the coveted CTB winner's badge. 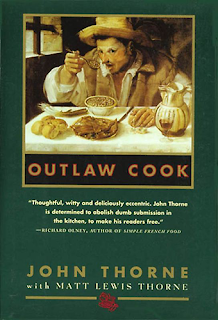 Thorne's prose is an interesting mixture of the erudite and the commonplace. One will learn much about a lot of different subjects, and need to look up many things along the way, but the writing is simple and direct and full of great quotes and turns of phrase. There are many intriguing essays in the book which explore different dishes and cultural traditions, some autobiographical asides, reviews of cookbooks and examinations of food personalities. Outlaw Cook devotes many pages to bread baking and outdoor hearths and there's a gloriously evocative chapter on Russians' love affair with mushrooms.

I really like Thorne's approach to trying out a new recipe or ingredient. Once something strikes his fancy, he's on an adventure to study it and make it his own. He reads about it extensively, cooks up many variations and then presents the reader with his findings. Whether it's hunting for the perfect meatball, simple pasta dishes, black beans and rice, pea soup or the best thing to do with a bounty of summer raspberries, there's lots of research and development in the Thorne kitchen and library and plenty of references offered up for further exploration. 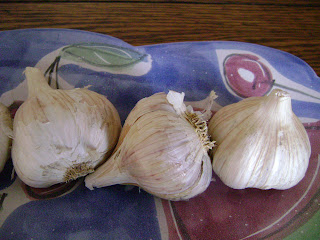 As an avid member of the Order of the Stinking Rose, I was particularly entranced by the essay on garlic soup. I've made creamy, decadently rich garlic soups and delicate garlic and rice soups, and thought that covered much of the culinary territory on that subject. Not so fast, says Thorne, with his musings on various Mediterranean permutations of garlicky broths. There's the paprika and saffron-laced Sopa de Ajo of Spain, France's Soupe a l'Ail Bonne Femme studded with potato and tomato, herb-redolent Aigo Bouido from Provence and even a cold Garlic and Walnut Soup with Fresh Goat Cheese.  Most of these soups require a crusty piece of toasted bread sunk at the bottom of the soup bowl, and since my gluten-free breadbaking production neither produces quantity nor quality (witness the hockey puck "fluffy bun"example in the photo below), I turned to my trusty recipe card file for a breadless garlic soup recipe instead. 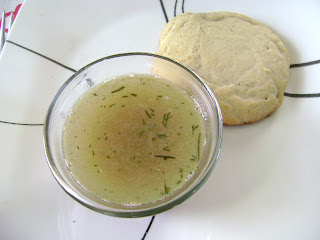 My garlic soup recipe is of origin unknown, most likely copied out of a cookbook borrowed from the public library during my foodie youth, but I tinkered with it enough to confidently call it my own adaptation. It's a very herb-redolent broth, perfect for bolstering the winter-ravaged immune system  and imparting a warm glow after a day battling the wind and cold. Just be sure to share it with those around you, since "...garlic is the ravisher, dominating those who would eat it, and then crowing that subjugation to the world through the body's every pore." (p. 120)

Bring water and salt to a boil and drop in garlic cloves. Boil 1 minute, then fish out garlic and peel. Cut off root tip and cut into chunks. Throw it back into the simmering pot with the herbs and spices.

Bring to a boil again and then lower heat and simmer 30 minutes. Strain soup to remove herbs and then pour broth back into pot. Finely mash the cooked garlic and put back into the soup pot. Bring to a low simmer.

Beat egg yolks with olive oil and add to the soup pot. Gently simmer for 2-3 minutes to let simmer and thicken. Add salt and pepper to taste and serve hot with a sprinkling of cheese on top. 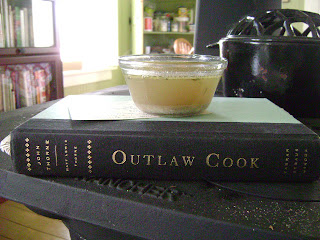 I'll have a roundup of all the Cook the Books posts about Outlaw Cook after the January 23 deadline, so be sure to stop back to see all the submissions. Next up for our book club is Roald Dahl's childhood classic, Charlie and the Chocolate Factory, which will be hosted by Deb during February/March. Happy reading and eating!

How fantastic! One day I will recapture the flavour of a garlic soup I had in Switzerland.

Great post and thoughts on the book. I did have a hard time finding a copy of "Outlaw Cook" for this round of CTB. It unfortunately is languishing on my bedside table. I have got to carve out some time to get it read SOON! (And, excellent soup here!)

A great review of a super book Rachel and the garlic soup is on my "to do soon" list. Yours sounds delicious.

I really enjoyed Outlaw Cook Rachel--thanks for turning me on to a great writer. I am craving your garlic soup right now--it looks like the perfect thing for my currently slightly run-down immune system. ;-)

Very interesting soup, Rachel. I hope winter is not being too harsh this year. I am sure your immune system appreciates the help ;)

Beautiful picture with the book and the soup!!! It sounds ilke a very interesting soup--one that my dad would love!

I haven't gotten a cold since march 2011 and I was trying to figure out what I did differently... LIGHTBULB! It's got to be the almost daily doses of homegrown garlic I have been consuming! Too bad my garlic dealer lives so far away lol

I have a love-hate relationship with garlic, since it upsets my stomach. The soup looks tempting enough though! Great pick for CTB, thank you Rachel :-)