Reading Frankie's Place: A Love Story, by Jim Sterba (NY: Grove Press, 2003) makes you feel like you are visiting friends at their summer camp on Maine's Mount Desert island. Sterba's book is an atmospheric account of his courtship of, marriage to and many felicitous summers spent with fellow author Frances "Frankie" FitzGerald.  Sterba is a former NY Times and Wall Street Journal foreign correspondent and FitzGerald is a Pulitzer Prize winning nonfiction writer, both of whom found love later in their busy, globe-hopping lives. 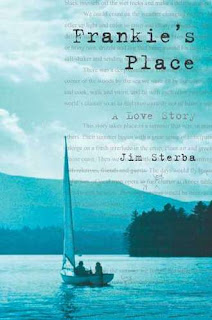 The book revolves around the slower pace of summers spent at Frankie's place, a family-and mosquito-shared cabin in the woods near the shore. It might be summer, but there is still a schedule to adhere to: Frankie is an advocate of morning dips in Maine's icy waters, calisthenics and excessively long hikes, which Sterba loving refers to as FitzGerald Survival School. There is also much writing to be done (Frankie likes a manual typewriter for that task), reading, sailing, mushroom hunting, mussel gathering and other foraging/shopping for provisions.

There's also an amusing chapter about the author's search for WASPs (White Anglo-Saxon Protestants) on this island historically populated with many of these folks. He researches the subject at the library, at a private swimming club, and in other prowlings around the village of Northeast Harbor. They elude him, particularly the wily subspecies, the High WASP, until a chat with a friend clues him in to the fact that he married one. Oh.

Punctuating all the prose is Sterba's recipes - offered in somewhat slapdash prose style, with plenty of room for variations according to what the pair might have rustled up from the ocean, container garden or woods. I have festooned my copy of the book with lots of bookmarks to hold my place for various recipes, but one dish called out to me immediately. Sterba describes a warm bean salad that he first tried at a friend's wedding. He pestered the caterer like a good newspaperman until she gave up her secrets and so I offer to you my own adapted version that made us all very full and happy at Chez Crispy Cook. 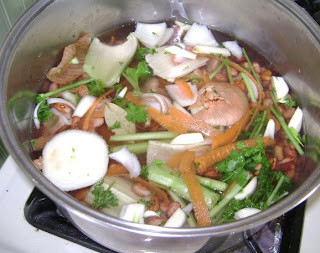 Salt and pepper to taste

The night before, cover beans with cold water and let sit out at room temperature to soak overnight. Change water 2-3 times.

The next day, drain beans and place in a large, heavy soup pot with 2 Tbsp. olive oil, onion, garlic, bay leaves and vegetable broth. I added in the soup trimmings as noted above to further enrich my bean broth. Bring to a boil and then simmer along merrily until beans are to desired softness (about 1-1/2 hours).

Drain off and reserve bean broth. Let beans cool a bit, and then fish out all the large bits of veggie detritus (onion skins, celery stubs, parsley stems, bay leaves, carrot peels, herb branches). The garlic should have become quite soft so you can just "moosh" that in, to use a favorite Sterba cooking term.

Mix up a vinaigrette with 1/4 cup olive oil, lemon juice, fresh herbs, and peppers. Add in some of the reserved bean broth (about 1/2 cup). Let stand for 20 minutes, stirring occasionally. Gently dress the beans and season with salt and pepper to taste.

Serve warm or at room temperature. 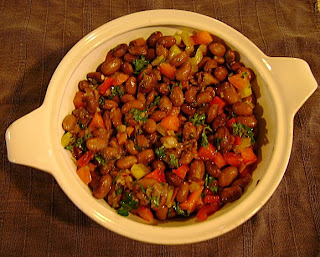 Vanessa's Beans are some good frugal eating and I even have leftover bean broth to use in other recipes (I'm thinking about some pasta fazool later on). I have sampled and made many other bean salads, but I think the key here is that the beans are warm and infused with so many aromatic flavorings in their cooking liquid that they really melt in your mouth.

One serving of this lovely dish is being sent over to my friend Simona at Briciole for her semi-annual Novel Food event, where you will find lots of other interesting posts about various books and the recipes inspired by them after her March 18 deadline.

A second serving of Vanessa's Beans is being sent to another blogger compadre, Heather of Girlichef, who is guest hosting My Legume Love Affair #45. This monthly blog event celebrates legumes in all their glory and is the brainchild of Susan the Well Seasoned Cook.

I'm pretty sure I need to make a batch of these and then find the book and read it while eating them!

"...until a chat with a friend clues him in to the fact that he married one. Oh." HA!

Great review and thanks so much for sharing these delicious beans with MLLA this month, Rachel =)

What a great review Rachel! This book sounds fabulous and the beans are making my mouth water.

You also have reminded me and inspired me to join in Simona's event with my latest review and recipe--so thank you! ;-)

Very nice review, Rachel, of an interesting book. I have never been to Maine and your post makes me want to visit even more. Frances sounds like an interesting character. And the recipe is very nice. I cook beans with aromatics as well and love the result. I can see how this recipe called out to you. Thank you so much for your contribution to Novel Food!

Oh! I love the sound of this book (interesting-sounding couple) and the recipe of this delicious-sounding bean salad. I'll keep my eye open for the book and plan on making the recipe. :-)

Bean broth is a great idea! And I love that the book is littered with recipe inspiration. :)