Turning up the HEAT to Cook the Books

Time to Cook the Books again, dear readers. No, it's not tax time, but time to post about the latest book selection from the greatest online foodie book club, Cook the Books, which I and two dear blogger friends started up two years ago. Johanna of Food Junkie, Not Junk Food and Deb of Kahakai Kitchen and I take turns hosting each bimonthly round of Cook the Books, and this time it is the lovely Johanna who is leading our discussion of Bill Buford's book "Heat: An Amateur's Adventures as Kitchen Slave, Line Cook, Pasta-Maker, and Apprentice to a Dante-Quoting Butcher in Tuscany" (NY: Alfred A. Knopf, 2006). 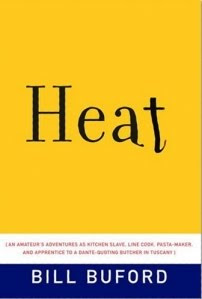 This is a very entertaining memoir by Buford, a founding editor of Granta and writer/editor for The New Yorker, who left the literary life to pursue his passion for the culinary arts. Buford signs on to work as a grunt with Mario Batali at his three-star restaurant Babbo and so we get a backstage pass to the testosterone-fueled, invective-filled world of a high-profile New York City restaurant kitchen. Much of the book focuses on the Mario Batali back story, but I was actually more intrigued by two others who lie within the Rabelaisian orbit of Planet Mario, Joe Bastianich and Marco Pierre White.

Joe is the laconic scion of the Bastianich restaurant empire and Batali's business partner. He knows food and wine and how to keep the finances afloat in the Batali restaurant galaxy. He does not wax poetic about the glamour of restaurant life, having had to clean out the grease traps, pull bay leaves out of choking throats and sweep up piles of post-exterminator insect detritus in the family restaurant.

Marco Pierre White is an even more outrageous, larger-than-life character than Batali, who endured a four-month stint as White's kitchen slave in London before quitting in a fit of pique. White is so very foul-mouthed, so mean, so physically intimidating, as described by Buford, that even when the two meet, over a frightfully proper traditional roast grouse meal at White's newest restaurant acquisition, he works himself into an increasingly cold fury ruminating on every bit of the dish that is overdone or incorrectly prepared. There are croutons that are insufficiently darkened, a sauce that is too intense, butter that is not foamy enough, and an overabundance of parsley garnish. Each rant is punctuated by his dining partner's name, so that the reader feels the tension ratchet up with each seemingly polite, yet darkly ominous, phrase from White's lips:

"It is made with a veal stock reduction, isn't it, Bill?"

"The bread crumbs, they're disappointing, aren't they, Bill?

You get the point.

The other passage from Buford's book that really stuck with me was his description of how the Food Network packages its food celebrities (called "talents" or "brands") and their shows. They are less reliant on the quality of the cooking information so much as the sensual, lip-smacking, groaning-while-chewing presentation skills of the talent. Buford describes it further:

"The skin-flick feel was reinforced by a range of heightened effects, especially amplified sounds of frying, snapping, crunching, chewing, swallowing...The "talent" (also known as a "crossover" personality, usually a woman with a big smile and no apron) was directed to be easy with her tongue and use it conspicuously--to taste food on a spoon, say, or work it around a batter-coated beater, or clean the lips with it". (p. 143)

Seems like Julia Child wouldn't cut it these days with her data-laden French Chef episodes. But I still like to watch her chirpy reruns, which I guess makes me hopelessly old-fashioned.

It was hard to decide on a dish I wanted to prepare in honor of this book as there was a parade of cooks described in its pages. Ultimately I decided to try a recipe by Le Grand Orange, Mario Batali. I waded through a thicket of his online recipes without being inspired. So many of them consist of meaty meat plugged with other bits of meat, wrapped in layers of yet more flesh. I do see that he is planning a new book focusing on vegetables, so that should be interesting to pore over.

Ultimately, I ended up making a very elegant Batali appetizer (though we ate it for dinner, at least the gourmet type adults did), Goat Cheese Truffles with Peperonata. Now I can see that he has a dab hand at vegetarian fare and so he is back in my good graces.

To make this wonderful dish, you take some arugula, blanch it for 10 SECONDS, whereupon it wilts into submission, like spinach and becomes a whole new vegetable with a delicate texture and taste. Magical!

You then toss your blanched arugula with a lemony dressing, put a little mound on a plate, top it with red pepper strips slow-cooked with sherry vinegar, and then top these with goat cheese "truffles" rolled in paprika, crushed fennel seed (Mario says fennel pollen) and poppy seed. It was spectacularly good and changed my mind about arugula. I have only used it fresh in salads, but the blanching technique made me fall in love with this salad green which is actually still hanging out in the lettuce patch outside the Crispy Casita. Will definitely plant more arugula next Spring. 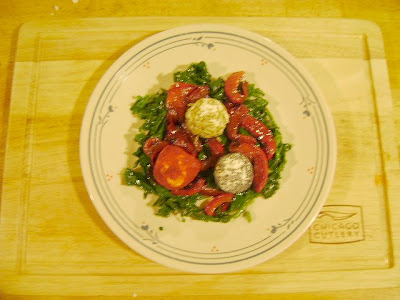 I would only change things up by making smaller, more bite-sized goat cheese truffles next time. Wouldn't this make a spectacular salad or first course menu item for an elegant Christmas dinner with the play of red and green?

Please join us after the December 3 deadline for this round of Cook the Books to see all the thoughtful and tantalizing entries. Anyone is welcome to join in our book club. There's no entry requirements other than reading our selected foodcentric book and then blogging up a post about the book and a dish that you have cooked up which is inspired by your reading. A guest judge reviews the roundup of posts and then picks a winner who receives a fabulous Cook the Books trophy badge to adorn his or her blog.

Our December/January Cook the Books selection will be Victoria Riccardi's "Untangling My Chopsticks: A Culinary Sojourn in Kyoto" and I will be hosting the book discussion and roundup with Ms. Riccardi herself serving as our guest judge. Please join us!
Posted by Rachel at 9:34 AM

Thank you so much for your lovely comment and my blog, which brought me over to your blog. You have intro'd me to Cook the Books. I look forward to participating one-day. Kind wishes.

Outstanding review Rachael. I enjoyed the quotes you selected. The Food Business is just that - BUSINESS! And those truffles on arugula are beautiful and will be on my Christmas menu.

Reading the various posts for Cook the Books is so much fun: different perspectives on the reading choice and different dishes. I agree with you that the goat cheese truffles would look good on the Holiday table.

I love your review, Rachel! I wasn't too enamored by this selection...but you made it sound amazing, LOL! Your truffles are so tempting, as well...yum!

I love your description of the blanched arugula! I've got to grow some next year and have fun with it! I love what you did with the truffles (I agree...just a bit smaller...), but do try it with fennel pollen if you can get your hands on some! It will change the flavor profile completely! Great post!

I enjoyed your review. Very insightful and the truffles look very yummy!

great post as always Rahcel, and what a dish you cooked up! I never thought of blanching arugula. BTW, I am currently half way through Untangling my chopsticks and really loving it. Makes me want to travel to Kyoto like yesterday! Thank you for a great pick. The roundup will be posted soon, hopefully tomorrow.

I am so happy to have found Cook the Books. Even when I do not participate with a shared post/meal...I like reading everyone's review and see what they have cooked.
Love your review of this book!

I am so bad in that I just getting around to see all the CTB posts now. ;-) Love your review--as always very insightful and the Goat Cheese Truffles are so picture perfect and elegant too. Great job!

I am just starting a quick reread of Untangling My Chopsticks. ;-)