Eat Your Roses. And Your Squash Blossoms 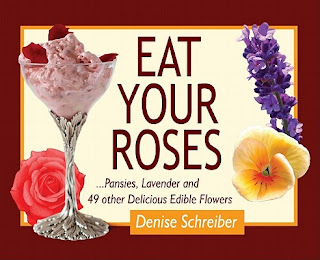 It was during the steamy days of summer that I gave a thorough test drive to a review copy of Eat Your Roses: Pansies, Lavender and 49 Other Delicious Edible Flowers by Denise Schreiber (St. Lynn's Press, 2011). This great kitchen and garden reference is handily bound with a sturdy wire spiral binding so that it lays flat to each page enabling the reader to tote it about during the harvest, cooking or even the selection of one's garden seedlings.

I learned so much from this book and was pleasantly surprised to learn that many of the vegetables and herbs that I let flower on after the main harvest are still able to provide food and garnish for my table. Those radishes that inevitably get past me with their growth spurts are still able to provide snappy salad toppings with their pale pink and purple blossoms. Those deep blue and purple bachelors buttons that I let reseed themselves in bits of my vegetable garden because they arere just so darn pretty and feed the pollinating insects also fed my family for the first time, strewn over our summer salads.  And who knew lilac blooms were edible? I grow a stand just for its heavenly scent and color, but next Spring some lilacs will migrate into my cream cheese to be spread on a cracker for a pre-prandial snack.

Schreiber's book is loaded with color photos and each page is devoted to a different edible flower. Organized alphabetically, the book gives descriptions of how to grow, harvest and prepare each plant and also gives cautionary advice about some of their health impacts (i.e., don't consume chamomile if you are taking blood thinners).  A recipe section at the back lists many scrumptious and unusual dishes that will appeal to all five senses, including Fresh Salsa with Pineapple and Nasturtiums, Watermelon and Feta Salad and Lemon Verbena Salmon.

My tastiest use of this informative book was in experimenting with squash blossoms. I had a healthy zucchini crop this summer (only three plants) with plenty of blossoms available during the really hot spells. Schreiber's book notes that "squash flowers can be stuffed with cheeses and other fillings, battered and deep fried or sauteed and added to pasta". The trick with the squash flowers is to get the male flowers (the ones without a bulbous base that indicates that a baby zucchini is on the way) when they have just started to open, as they are rather fragile and get raggedy even after a day in the sunshine. The other trick is to avoid getting stung by a bee while picking them, as they are also very attractive to the Insect Kingdom. I found that early morning, when the cold-blooded bees are still drowsy and slow, was the best time to swoop in and steal them. 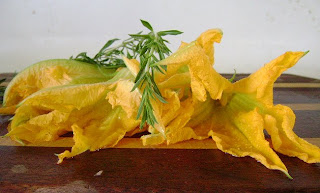 I don't often have great frying success, so rather than battering and frying my blossoms, I gently rinsed and patted them dry, then laid them on a parchment-lined baking tray. I mixed up a little softened goat cheese with salt, pepper and some chopped fresh summer savory and gently stuffed my squash blossoms. I then gave my flowers a good spritz of olive oil.  I popped them in the toaster oven and broiled them for a few minutes on each side, until the tops browned and the cheese started to melt. 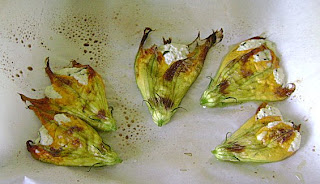 They were decadently good and we indulged in this little snack several times over the next few weeks, subbing in cream cheese and basil and rosemary, when the goat cheese ran out and we wanted a different herb flavor. They are also terrific with a little fresh marinara on the side.

If you enjoy cooking from the garden, foraging your own grub or interesting kitchen experiments, you will want to buy your own copy of  Eat Your Roses. You can purchase one at the St. Lynn's Press website ($16.95) or your favorite bookstore.

Note: I received a review copy of this book from the publisher, but was under no obligation to post a review. My comments, as always, are my own.
Posted by Rachel at 11:40 AM 3 comments:

A Look Back at the 2011 Garden and some Braised Celery

Despite lashings of rain and wind from Hurricane Irene and a sodden Spring and Fall, the garden season here at Chez Crispy was productive indeed. Our garlic crop was tremendous and I have given away lots of fat-cloved batches to friends and family and will be sticking some in the ground this week for next year's crop.

We also had a bodacious broccoli and hot pepper crop. I thought I had bought one variety of hot pepper seedlings and one of mild peppers, but both turned out on the fiery side, so our freezer is stuffed with sliced capascins, we dehydrated some and I made a batch of hot pepper sauce. We ate tons of broccoli over the summer and I put lots in the freezer as well, though we also enjoyed trying it grilled over a piece of foil on the barbecue. We drizzled it with olive oil and seasoned it with salt, pepper and fresh basil, and it was very tasty. 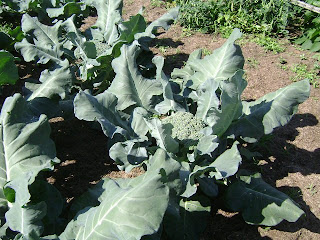 The lettuces, escarole, tomatoes, cucumbers and herbs were also abundant. I pickled. I sauced. I froze. I dried lots of comestibles during the harvest season. My canning sessions were limited to tried and true favorites like tomato sauce, spicy salsa, dilly beans and zucchini relish.

I was given some interesting new plants by my buddy Andrea, who works at an organic farm. She gave me some lemongrass, epazote, chervil, some smudging herbs which I can't remember the name of, and some dragonhead, which was a very cool, spiky purple flowering herb which makes a lovely tea.  The epazote was an interesting looking plant, and though I love to smell the odor of turpentine, I am less inclined to ingest it. This Mexican native herb spells very pungently like the turps, so I just let it grow on. It made lots of seeds and some have already sprouted up next to the mother plants so I will no doubt get a second chance to inspect it next Spring. Let me know if you have played around with epazote in the kitchen and have some ideas for me.


The chervil was a gorgeous plant that I would consider growing among my flowerbeds, with lacy dark green leaves and a licorice flavor. A few chervil leaves in the salad bowl make a nice accent.

The lemongrass was also a great surprise. I had never considered growing this tropical plant because I thought it would be too tender, but it grew quickly and thickly in my garden and I still have a luxuriant stand of lemongrass even at this late date and after two frosts. The leaves are fragrant additions to curries and soups and I have a few bundles drying in the garden shed for winter teas. I've yet to scoop out the remainder of my lemongrass stalks and chop them up for the freezer but will need to do that and pronto, since snow is forecast for tomorrow.


I swapped a bunch of garden items with Andrea throughout the season and when given a dark green and very fragrant bunch of celery from her raised beds, I thought I would try out a recipe that would highlight this vegetable. I had recently gotten in a Depression-era cookbook at our bookshop, Alice Foote MacDougall's Cook Book (1935), and enjoyed browsing through her recipes and prose. A recipe for a simple Braised Celery  caught my eye, so I made it up and it was a herbal, delicately-flavored side dish that we dined on for one meal and then reused into a tasty celery soup the next day by adding some leftover mashed potatoes and milk.

"Remove the outside coarse stalks from a bunch of celery and save for seasoning. Wash the remainder and cut into pieces one inch long. The large stalks should be cut down the middle.

Place 2 tablespoons of butter in a frying pan and, when melted, put in the celery. Saute slowly until tender. Season with salt and pepper. This is a pleasant addition to one's dinner."


Just so! A simple but luscious and certainly more-than-pleasant recipe, which I will be sharing this week at Weekend Herb Blogging, an event hosted by Haalo at Cook Almost Anything and guest hosted this time round by Cafe Lynnylu.
Posted by Rachel at 7:52 AM 2 comments: