Eggs The Color of Tea

Way back when, the Crispy Cook was a young sprig who served as an Au Pair for a family one summer. On my time off I would ride a bike into the little touristy beach town nearby and prowl around, but for a teen in a strange town with no money, there wasn't much to do besides poke around the local antique and souvenir shops. After a couple of these sojourns, I just ended up spending my down time relaxing and reading in my room.

The house was well-stocked with books, and being a foodie in training, I often picked a cookbook out of the shelves to peruse. I remember writing down many recipes out of the 1000 Recipe Chinese Cookbook by Gloria Bey Miller and being fascinated by the variety of intriguing ingredients and types of cuisine that were presented in its pages. One of the recipes I remember vividly was for Tea Eggs, hard-cooked eggs steeped in black tea and fragrant spices.

I never did get around to making these eggy delicacies until just last week, after having read the latest selection for Cook the Books, the online book club that I and three of my blogger buddies take turns co-hosting every other month. Our featured book this time 'round is The Color of Tea, by Hannah Tunnicliffe, and the author herself has graciously agreed to serve as the judge of our contributed posts about the book and the dishes we were inspired to make. 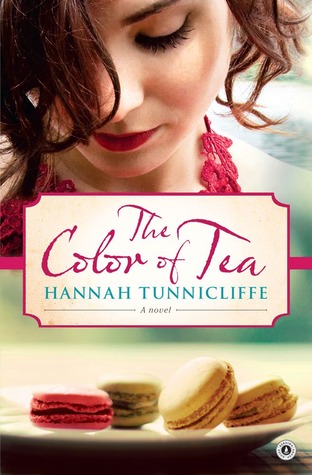 The Color of Tea is an interesting novel about an English woman married to an Australian man, who emigrate to the south China island of Macau after husband Pete lands a job supervising construction of a new gambling casino. Macau is a former Portuguese colony and the culture is an amalgam of Eastern and Western influences, as our heroine Grace discovers in her new life.

Grace and Pete are recovering from multiple rounds of unsuccessful infertility treatments, and as one way of clawing her way out of her malaise, Grace decides to open up a tea shop that specializes in delicately colored and flavored pastries, including many varieties of macarons, those delicate French almond and meringue confections. That's when I really got into the novel, with its descriptions of the customers and coworkers that Grace befriends. The reader finds out the intriguing back stories of these people and of Grace herself, which makes her a lot of more sympathetic than she was to me at the beginning of the tale. I also enjoyed learning more about the issues that foreign workers face which is an integral thread in the novel as well.


One thing that really irked me, though, was the front cover art. It's a delicious looking cover, alright, but given that our protagonist was a redhead, I kept waiting for some explanation of who the long-lashed brunette was featured on the cover. Shouldn't the art department have some conversations with the editorial department at the old publishing house before the book is cranked out? 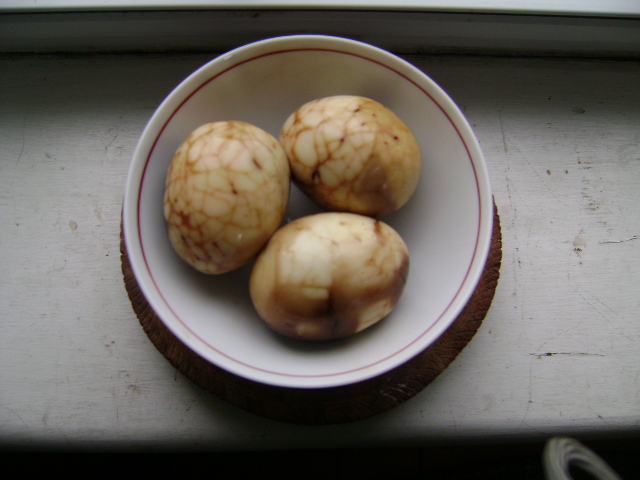 Back to the Tea Eggs....Reading this book provided the perfect opportunity to finally eggs-periment with making Tea Eggs, as I imagined that might be something found on the menu at Lillian's, Grace's Macau cafe. I found a recipe over at Tiny Urban Kitchen, and it was simple enough: hard boil some eggs, then tap the shells to crack them all over and then simmer (for two hours!) in a mixture of black tea and star anise. I didn't have star anise, but did have some five-spice powder, so I made a small batch. They were beautiful colored with a crazed pattern of brown and white, but to me they weren't much different in taste from a plain old hardcooked egg. They were rubberier in fact, from all those extra minutes in the pot and had that greenish ring around the yolks that one gets from overcooking eggs. Ah well, at least I finally satisfied my curiosity about this dish and I remembered how delicious five-spice powder is, so I will utilizing that more in the kitchen.

Please join me in visiting the other Cook the Books posts about The Color of Tea back at the blog. Deb of Kahakai Kitchen is our wonderful hostess this round and she will be shortly posting the roundup of writings and recipes about our featured novel.

And feel free to join the regulars in our foodie book club in reading our June/July book pick, M.F.K. Fisher's collection of essays, "How to Cook a Wolf".