I had a few queries about the Potato Pizza I described in my last Crispy Cook post, so I will share the kitchen wisdom of my pizza maestro, husband Dan, in that regard. After all the many steps in making the perfect thin and CRISPY gluten-free crust, the topping for a Potato & Rosemary Pizza is ridiculously easy. Here's what Dan does:

Dan slices the potatoes thinly using the slot on the side of our box grater. You want the potato slices to be about 1/4 inch thick. A mandoline makes them too paper thin, but the box grater works just great. Dan then soaks the potato slices in cold water, both to keep them from oxidizing brown and to wash off some of the starch. Then he drains and pats the potato slices dry when the other ingredients are chopped, and the pizza crust has gone through the first baking stage and is ready to receive its bountiful toppings.

Arrange potato slices on pizza crust so that they are slightly overlapping at the edges. Sprinkle with chopped garlic, season with salt and pepper and brush on a little olive oil over all. Sprinkle with a final coating of Parmesan and then bake your pizza in a preheated 375 degree F oven for 15-20 minutes.

We saw a potato pizza being made on one of Martha Stewart's shows last year and experimented with the basic idea a few times before coming up with this version. You'd think having two starches in one recipe would be too heavy, but it's actually a nice combination and not too rich.

It's been four years (and 400 posts!) of living gluten-free and Dan has finally perfected his pizza crust. He's the head baker in the house (I just dabble at it) and loves to tinker around with recipes for gf rolls and breads. After many, many tweaks and taste testings, the recipe below gives the latest, greatest version of a chewy, thin pizza crust, just like Dan used to chomp on in his carefree, pre-celiac days.

Many of the other pizza crust recipes we've tried either come out crumbly and dry, like that Chef Boyardee pizza from the box mix we thought was the ultimate in deliciousness in our Seventies-era youth OR you get a big, spongy "Sicilian" type pizza crust, which is not to our family's taste. We like our pizza thin and CRISPY, of course. The better to slap toppings on, we say! Here's a picture of a delicious rosemary-dusted potato pizza: 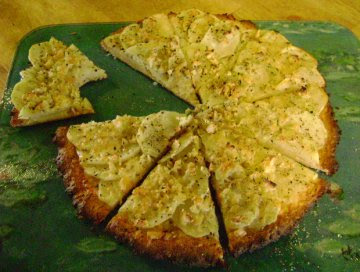 Since we love pizza so much and since we are eating gourmet GF meals at home rather than dining out 99% of the time, we invested in a wooden pizza paddle, a pizza stone and special pizza pans. The pizza stone really seems to get the pizza crust to crisp up over our pizza experiments just using the pizza pans alone or trying pizza on a cookie sheet.

Dan starts out with 2 cups of the flour mixture called for by the late GF legend, Bette Hagman, in her wonderful bread bible, "The Gluten-Free Gourmet Bakes Bread" (NY: Henry Holt, 2000). He makes this up in 12 cup batches and we keep this is a separate canister in the pantry so we can make up rolls, bread and pizza crusts more quickly at dinnertime. Dan adds potato flour for a springier texture in his pizza crusts.

This recipe makes one pizza crust (about 12 inch diameter), though Dan usually makes two at a time and then pops one in the freezer for later. They thaw beautifully.

Generously grease 16 inch pizza pan with shortening. Slap on dough and pat it into shape with a fork. Finish spreading dough to the edges of the pan with your greased hands.

Bake pizza crust at 375 degrees F. for about 15 minutes, or until it is no longer wet on the bottom. Dust pizza paddle with cornmeal and slide pizza crust off the pizza pan onto the paddle.

Place pizza stone in oven on a lower rack. Turn up oven heat to 475 degrees F. Add your pizza toppings (a marinara sauce well-seasoned with oregano and garlic and topped with shredded mozzarella is our usual go-to topping, but the aforementioned potato pizza with very thin slices of potato, chunks of garlic and rosemary is a close second. And when the zucchinis are flying out of the garden faster than we can harvest them, zucchini pizza (see below) rules!).

Place pizza onto pizza stone. Cook until cheese melts and crust reaches desired crispiness, about 8-10 minutes. Keep an eye on your oven, though, as this high temperature can easily scorch all your hard work if you overcook it. 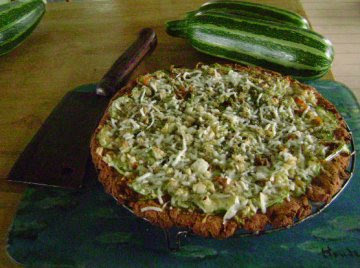