Grilled Whole Chicken in a Jacket of Flavors

I picked Marcus Samuelsson's "Yes, Chef" to be the August/September selection for Cook the Books, the online foodie book club that I and a bunch of my best food blogger pals host every other month to share our favorite foodie books and inspired dishes.
I found this to be an interesting book on several levels. First, my curiosity was piqued about this Ethiopian-Swedish-American chef I kept reading about and its a riveting and tragic story of how his severely ill mother walked 75 miles carrying 3 year old Marcus (then Kasshun) and toting his older sister along from their rural Ethiopian village to a hospital in the capital city of Addis Ababa. His mom succumbed to tuberculosis, and not knowing the siblings had any other relatives, a sympathetic nurse contacted aid workers who arranged for the pair to be adopted by a family in faraway Sweden. 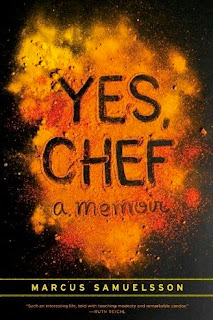 The book is quite a coming of age story; Marcus has a circuitous journey from youth to manhood, and it takes a lot of nudging from his adoptive parents and from his own maturation to look outside of his narrow focus on his career ambitions. He is very open in the book about his youthful immaturity, especially about how he initially rejected acknowledging the daughter he sired in his twenties. For someone who is still relatively young, he's had so many interesting cultural experiences and I liked the peek into Swedish rural culture and winced at the brutality behind the scenes of the haute cuisine hotel and restaurant kitchens in which he toiled.I also found the author's description of schoolboy bullying and other incidents of racial discrimination very moving. His term "race wounds" to describe the effects of these acts on people of color was something I have kept thinking about. I grew up in an interracial household and while I experienced incidents of prejudice, it was as a white person; someone who could shrug it off later when I was back in the safety of my family and later when I returned to majority status at school and in the wider American society. But "race wounds" is a powerful term and a good way of thinking how those of us with brown and black skins must armor ourselves to go out in the majority (for now) white public.Marcus' adoptive mother was definitely not his culinary muse. She viewed cooking as a daily chores, so her meals were routine and geared for convenience and short cooking times."She made pasta as not even a prisoner would tolerate it, with tinny tomato sauce and mushy frozen peas. She served roast pork from imaginary Polynesian shores, with canned pineapple rings and homemade curry whipped cream." !!!!Luckily, Marcus had a Swedish Mormor (grandmother) with her "own little food factory", who pickled, preserved, jammed, butchered and preserved food for her well-stocked larder. I relished his stories about racing home from Saturday soccer practices to help Mormor Helga prepare the family dinner.Another aspect about the book that appealed to me was the chef's cooking advice. He was always experimenting in the kitchen and trying to break out of haute cuisine strictures to "chase flavors', layering on different tastes and textures to create masterful dishes. It is this layering of flavors and textures and breaking out of accepted flavor palettes that inspired me after reading this delicious book. I decided to amp up the Grilled Whole Chicken that Dan and I have been savoring on our gas grill this summer. We love roast chicken, but often find that the breast meat dries out, some of the skin does not crisp up and the wings (my favorite part!) burn when we attempt a grilled bird.

Our remedies? Grilling the chicken upright on one of those vertical cookers helps crisp up all the skin. Covering the wings with foil protects the wings from carbonization. And perching the bird atop a tin can (many people use beer cans, but we find a sturdier black olive can does not tip over as much) full of boiling marinade circulates a moist perfume inside and outside the fowl so that the white meat stays deliciously juicy.

While I normally marinate grilled chicken in a mixture of olive oil, white wine and fresh minced herbs and garlic, I decided to layer on some more flavors: smoky (smoked paprika), earthy (ground cumin), spicy (hot pepper sauce) and umami (sauteed sliced mushrooms to accompany the sliced chicken). I think Marcus Samuelsson is onto something. This just elevated our simple grilled chicken to another level.
You can check out what other Cook the Books participants thought of the book and cooked up from its pages after the Sept. 30 deadline, when I will post a roundup of all the posts. And please do join us in reading and cooking from our next book selection, "The Hundred-Foot Journey" by Richard C. Morais, due Dec. 2nd.
Posted by Rachel at 4:07 PM 6 comments: