Dipping my Culinary Toe into Persian Waters with Funny in Farsi

Firoozeh Dumas’ first memoir, Funny in Farsi: A Memoir of Growing Up Iranian in America (NY: Random House, 2003), is a collection of lighthearted essays that illuminates her childhood experiences growing up as an Iranian transplant in Southern California. She and her family arrived before the Iranian hostage crisis and Revolution, and she clearly shows how she and her family were treated before and after this great divide. There were two reasons that I picked this book for the April/May selection for the online foodie book club, Cook the Books, that I and my wonderful blogger buddies, Deb, Simona and Debra, organize. First, this book offered me an excuse to explore the beautiful, fragrant Persian cuisine that Dumas describes in her book. Lucky Californians that get to dine out in numerous Persian restaurants started by Iranian-American immigrants!


Second, I picked this title because I feel like too often Iranians (and Iraqis, Aghanis, Pakistanis and now, Russians - yet again) get demonized in the press because of the actions of their political leaders. As Dumas so expertly shows in her anecdotes about her goofy relatives, her own culture clashes at school and as a young teen, there are universally human traits that we all share around the world, no matter our ethnicity, religion, etc., and I wanted to have others read about her experiences. A little extending of the olive branch, or rather, a bowl of olives, out into the world, if you will.


The best parts of Dumas’ book were her descriptions of her father, Kazem. He is such an interesting mixture of intellect and childish enthusiasm. He was a petroleum engineer back in Abadan, Iran, and later earned a Fulbright Scholarship to continue his graduate education in the U.S. It was during his American sojourn that one of his professors took him on a road trip to Princeton where he met (and flummoxed) Albert Einstein. After launching into a endless monologue of his American experiences, Einstein was rendered somewhat speechless. Or perhaps he took a mental vacation to hone his Theory of Relativity during Kazem’s "year's allotment of conversation".


I didn't have any cookbooks at the bookshop, or in my home library about Persian cooking. The local library's few volumes were out on loan, and I ordered a copy of "Cuisines of the Axis of Evil and Other Irritating States: A Dinner Party Approach to International Relations" by Chris Fair (NY: Globe Pequot Press, 2008) but it arrived after I'd made the meal I was planning for this post. Fair's book is so wonderfully witty, educational and droolworthy all at the same time, so I'll be featuring something out of its pages here sometime soon.

I was rescued in my quest for Persian culinary education by the wonderful Persian food bloggers out there. I spent a few rhapsodic hours perusing their recipes and food memories until I finally settled on the meal I would make for my family. Since we are Persian food newbies I didn’t want to make anything too wild or for which I would need to purchase endless amounts of exotic ingredients. I was struck by how fragrant -or perfumed might be a more descriptive word- the Persian food palette is; there's a heavy emphasis of great bunches of herbs and complex combinations of spices, and rosewater enters the scene too. It also seems like presentation is very important. As is copious amounts of available cooking time, for as Dumas explains in Funny in Farsi, ingredients are seasonal and require special attention:

"Summer meant eggplant or okra stew fresh tomatoes, and tiny cucumbers that I would peel and salt. Winter meant celery or rhubarb stew, cilantro, parsley, fenugreek, and my favorite fruit, sweet lemon, which is a thin-skinned, aromatic citrus not found in America. There was no such thing as canned, frozen, or fast food. Everything, except for bread, which was purchased daily, was made from scratch. Eating meant having to wait for hours for all the ingredients to blend together just right." (p. 25)

I finally settled on meatballs spiced with sumac (already had it in the spice cabinet) and a dried rose petal-less advieh, that Persian spice mixture that contains cardamom, cumin, and coriander, all of which I did have on hand). I got the recipe for the fragrant meatballs at Silk Road Diary, and then made up a pot of rice seasoned with sauteed garlic and cumin seeds which I shaped into the traditional Persian dome shape and decorated with radish roses and curling parsley springs. Our Iranian feast was rounded off with pitcher of cold mint tea, a chilled cucumber, tomato and herb salad and some fresh fruit. 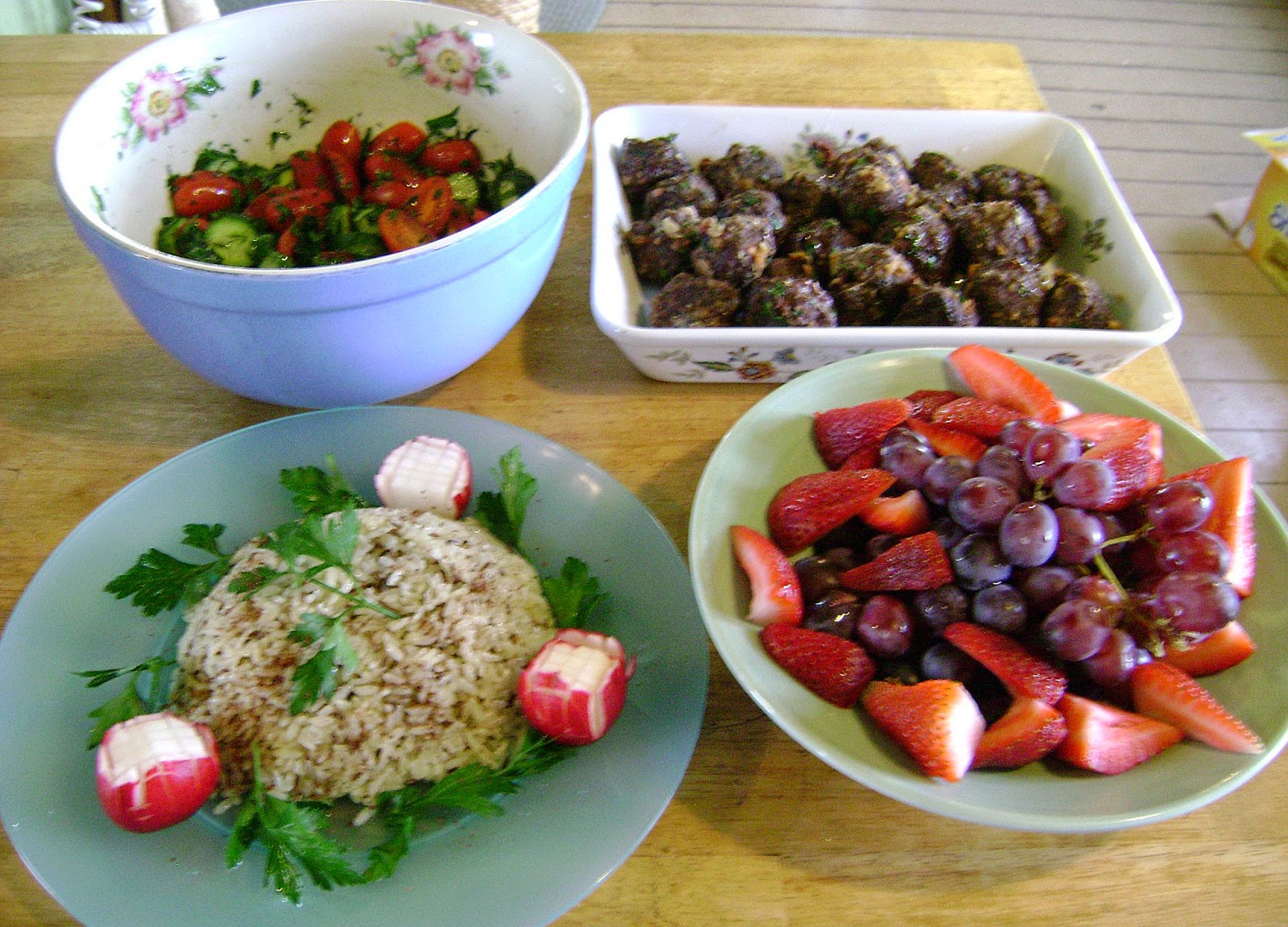 You can still join us at Cook the Books by reading and blogging about this wonderful book by the June 1, 2014 deadline. I will have a roundup of posts up a few days later so that we can all enjoy our various takes on the book and partake of our virtual Persian feast.

Our next Cook the Books selection will be The Apprentice: My Life in the Kitchen, by Jacques Pepin. Deb of Kahakai Kitchen will be our CTB host and deadlines for posts are due July 31, 2014. Come join us in reading, blogging and cooking up this great book!
Posted by Rachel at 2:54 PM 8 comments: