I have been enjoying Tarquin Hall's wonderful mystery series featuring Vish Puri, a portly but vain, bombastic but decent-hearted, Punjabi detective in modern Delhi. (His mother, Mummy-ji, also knows a thing or two about sleuthing, but is careful not to let her hidebound son know about her own investigations until they are all neatly sewn up.) Vish pampers his containers of blisteringly hot pepper plants, surreptitiously avoids his doctor's advice to avoid rich foods and is the head of a crack team of undercover associates which all have Vish-supplied nicknames: Tubelight (a morning-averse safecracker and car thief), Face Cream (a beautiful female mistress of disguise), Door Stop (the extremely lazy office boy), Handbrake (Vish's chauffeur), and Flush (an electronics and computer whiz who was the first to have a flush toilet in his village).

The books have humorous dialogue and Hall helpfully supplies glossaries at the end of each novel to explain all the unfamiliar words. I found that it was easy to tune my reading "ear" to the rhythm of Delhi-speak, or Dilli. Tarquin's plots offer a great introduction to the history and culture of modern Delhi and each book delves into a mystery that explains one or more social issues, from the caste system to the lingering effects of Partition on Indian-Pakistani relations. 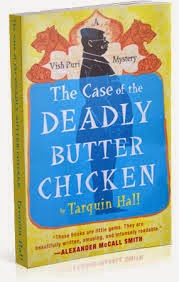 The series is now up to four wonderful books, and Tarquin Hall will hopefully continue to entertain me and many other readers with the foibles of our flawed detective with future installments. My favorite book so far is the the third novel,  The Case of the Deadly Butter Chicken. While the titular dish is something I do plan to try, I was actually intrigued by Chicken Frankies, a street food dish that Puri scarfs down throughout the series. I originally thought he was just inhaling chicken frankfurters, but after reading about them over and over in the books, a quick Internet search revealed that a Chicken Frankie is a roti slathered with spicy chicken bits, chopped tomatoes, onions, cilantro and hot peppers and then rolled up to be eaten out of hand.

Chicken Frankies are marvelously flavorful things, but they are not the most caloric food item in the world, so I do wonder why he is badgered by his wife Rumpi about eating them. He is on the rotund side, and he does seem to deserve her nickname for him, Chubby, gauging by his Alfred Hitchcock-like profile on each of the hardcover dust jackets. 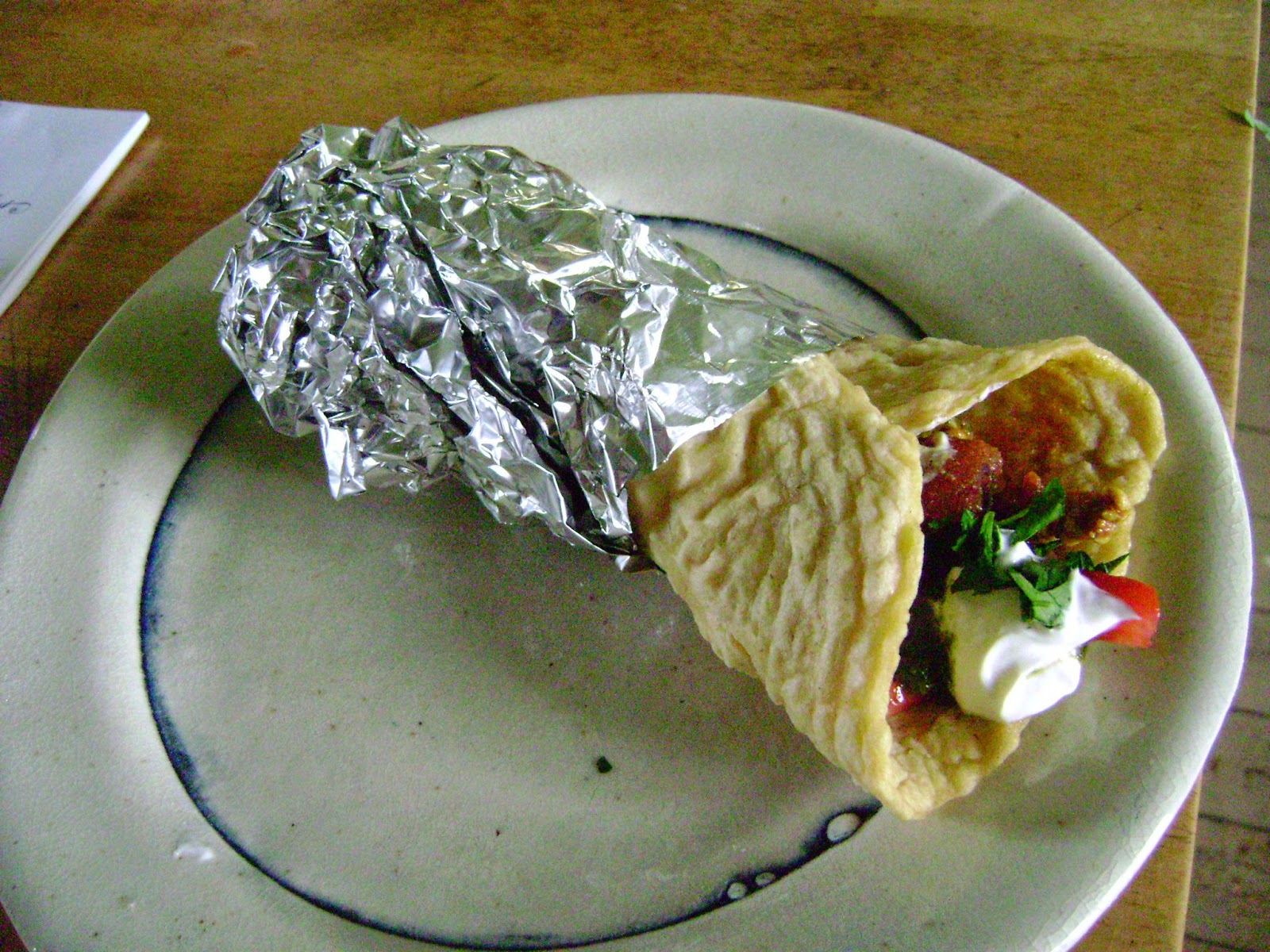 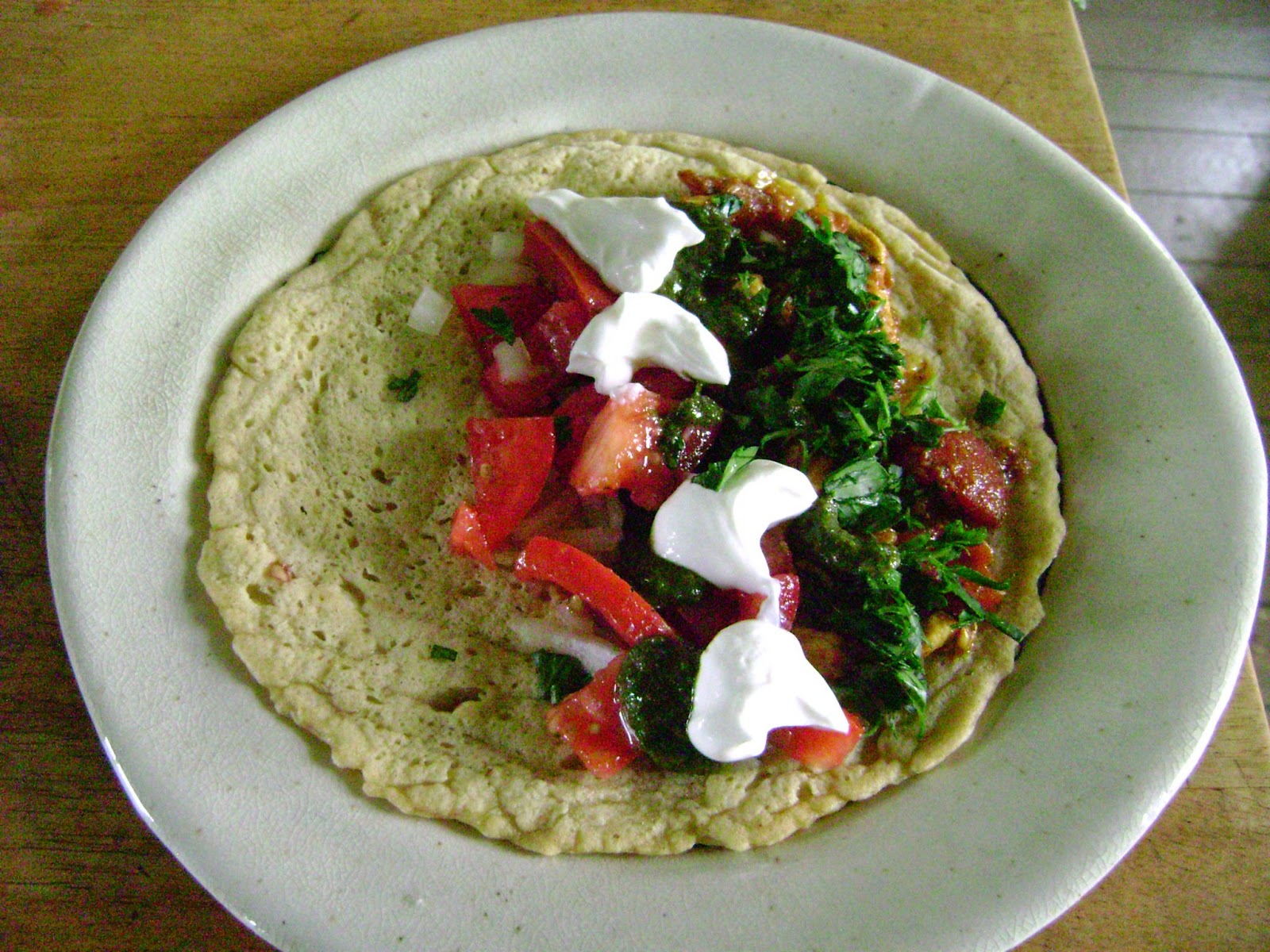 Here's our version in a gluten-free roti. Dan makes these handmade rotis in a variation of this stove-top pizza crust recipe using 1/4 cup chickpea flour (besan) and 1/2 cup white rice flour for the Bob's Red Mill All Purpose Gluten Free Mix called for in the original recipe. I actually prefer my Chicken Frankies roti-less, with the filling ingredients served over over basmati rice, but Dan must have Vish's favorite snack in the traditional manner.

There are many Chicken Frankie recipes out there, but the variation I like the best is to cut up some chicken breast into small cubes and slow cook it in tomatoes that have been simmered with browned garlic, fresh ginger, coriander, cumin, chili powder and garam masala. You then lay your spiced chicken along one side of the roti, add some diced fresh onions, hot peppers, parsley, cilantro and other seasonings (I threw in some very un-Indian sour cream in there, which Vish would find horrendous, being a good Hindu). Then roll up and eat. Don't forget the napkins!

I am linking this post to Novel Food, a blog event at Briciole, which rounds up posts about food inspired by participants' reading selections. Please consider adding your own entry to this round of Novel Food, which ends June 23rd.

When I married my husband Dan, I not only joined a warm and loving family, but I became privy to the heritage that he and his relatives shared. I got earfuls of family lore and albums of photographs of long dead ancestors posing with their town baseball teams, classmates and in one case, a taxidermied ostrich! (that was some strange photography studio where that shot was taken). I inherited cool cousins that were of my same vintage to go to softball games with and carouse.

And then there were the wonderful new-to-me things that my new extended clan ate: New England-y classics like scalloped oysters and baked beans, fresh garden peas (they are a different species than the canned and frozen peas my family was used to), manly delights that Dan's father made in his newfound gourmet phase of his retirement like Veal and Peppers and fork-tender barbecued chicken slathered with his famous, long-simmered barbecue sauce.

One of the family classics was Grandma Nellie's Chicken, a favorite handed down from the Irish side of the family. It's a simply seasoned baked chicken casserole covered over with sliced potatoes, celery and green peppers and is always a hit with our family and friends.The chicken gets tender and moist in its olive oil and butter basting and the vegetables roast down to make a fantastically tasty "gravy". All you need is a salad on the side and some rice to soak up the luscious chicken and vegetable juices and your meal is complete.

I usually add in fresh herbs (dill and thyme are good)  when I make this dish, and sometimes I add in sliced mushrooms if they are threatening to turn brown from too much time in the fridge, but I don't tweak this dish too much because I imagine its creator shaking her rolling pin down at me from On High and muttering about the cheekiness of the interloper that is trying to change up a classic recipe that doesn't need any gussying up. 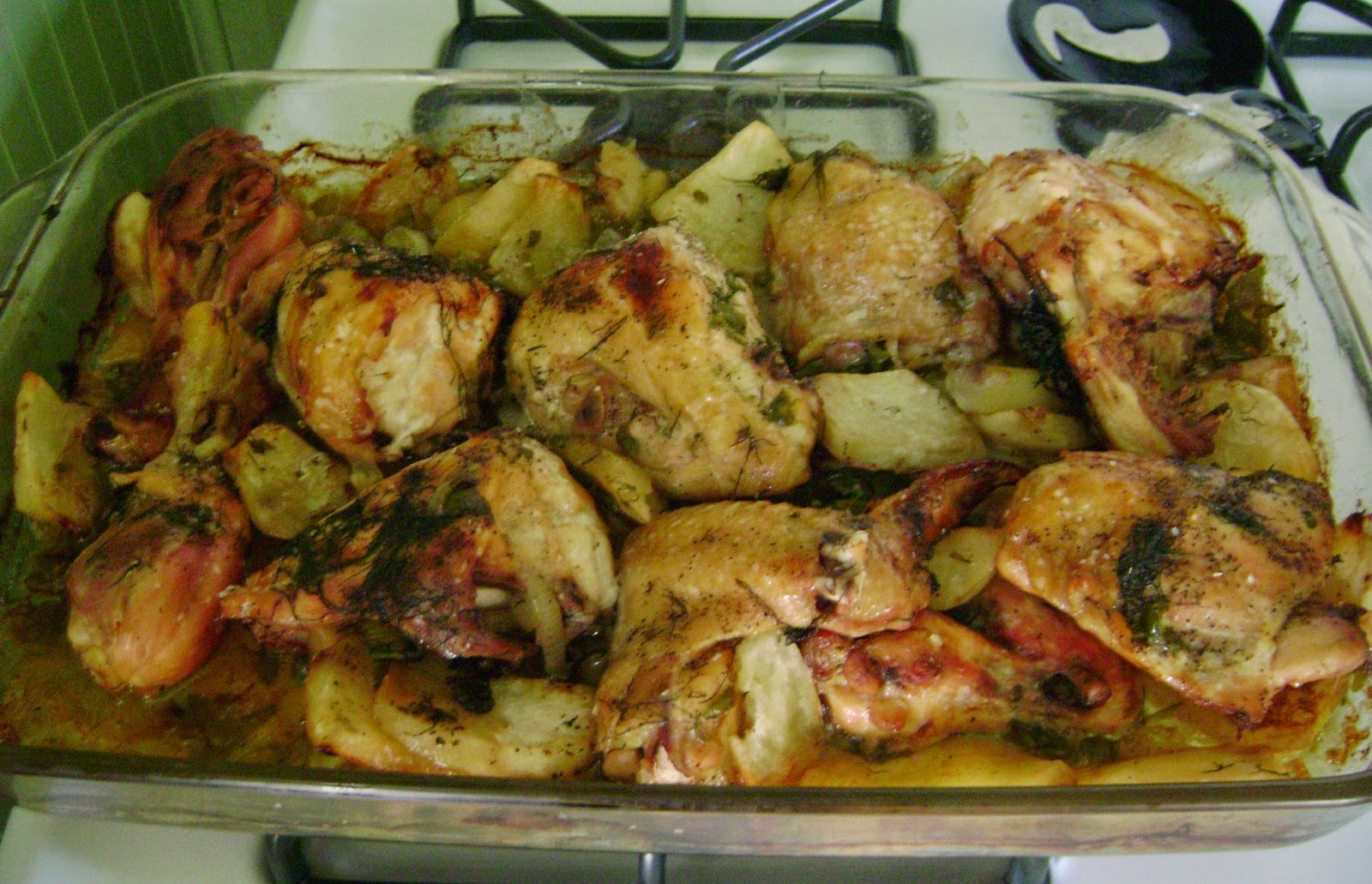 Here then, is a great chicken recipe from the Crispy Cook heirloom recipe vault:

Grease a 9x13 glass baking dish. Place chicken inside, skin side up. Layer potatoes, onions, peppers and celery in a mound over chicken. Dab on softened butter and drizzle with olive oil.

Season with salt, pepper and paprika to taste.

Bake 1-1/2 hours at 400 degrees F., stirring at least twice to get the chicken pieces evenly browned and to keep vegetables from sticking.

This recipe also works well with chicken thighs or a cut up whole chicken, but be sure to keep checking the chicken pieces for doneness and adjust cooking times accordingly.

I am sending this recipe over to Weekend Cooking, a weekly roundup of food blog posts at Beth Fish Reads. You'll find lots of other recipes, cookbook reviews, and other delicious posts by the other contributors at this weekly blog event.

Last night I checked out one of Price Chopper's new cooking classes at their Market Bistro location in Latham. I and a bunch of other area food bloggers received an invitation to attend the Two Guys and a Grill cooking demonstration led by Market Bistro Cooking Chef John Winnek and Chef Michael Ollier from Certified Angus Beef. As you can imagine, beef grilling techniques and recipes were front and center as our instructors led us through three different beef recipes with accompanying side dishes. 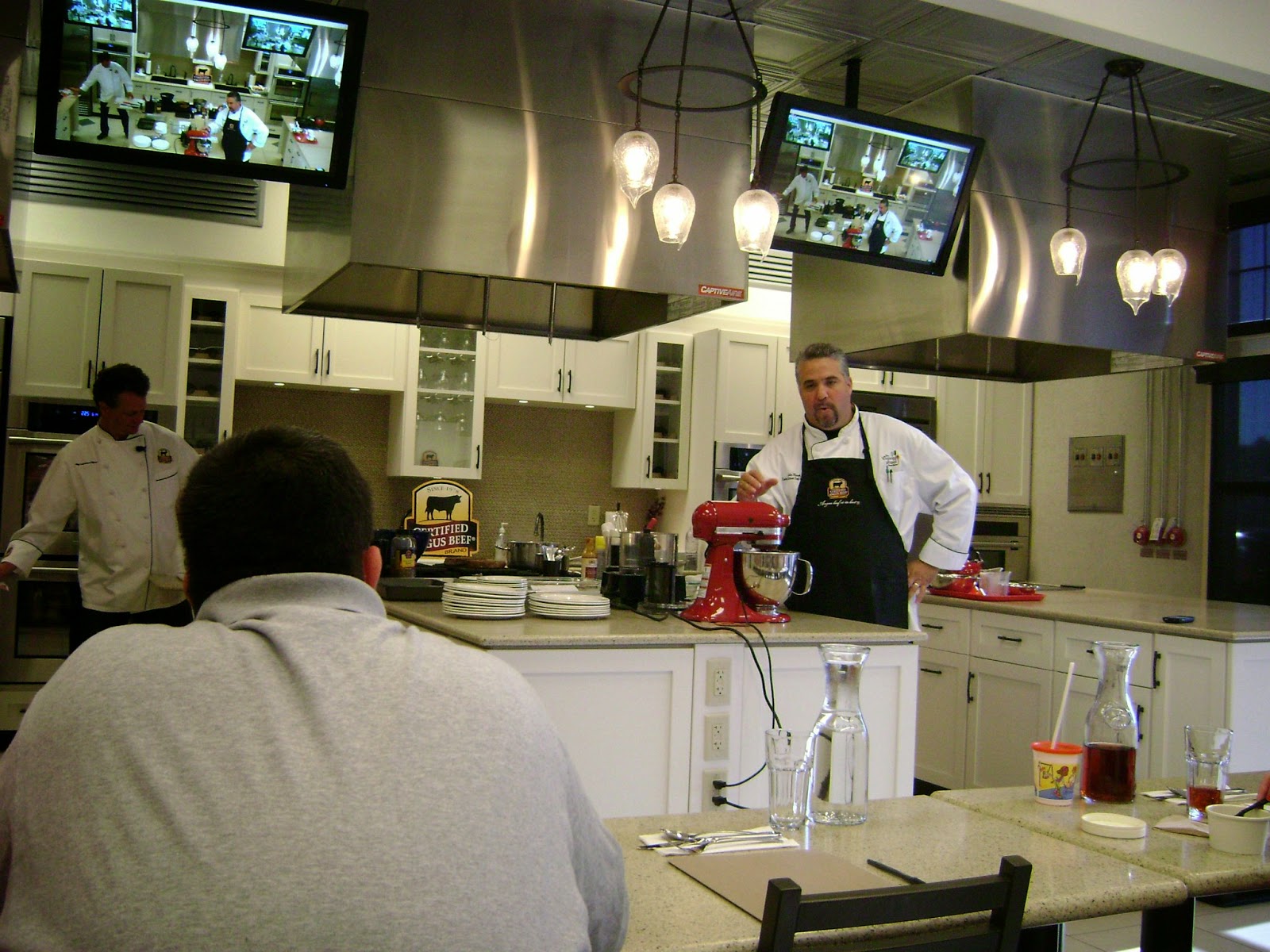 That's Chef John behind the red mixer and he was a delightful educator, mixing practical cooking information and techniques from his many years of restaurant experience in with the recipes. (He's a fellow Schuylerville resident, so he gets even more points for that!) He showed us how to make a delicious corn souffle (fresh corn kernels really add a nice brightness and crunch), roasted brussels sprouts with bacon, chimichurri sauce, and a wonderfully tasty potato gratin that starts out with baked russet potatoes grated on a box grater mixed up and baked with all kinds of wonderful ingredients.

Chef Michael was the beef master and imparted his kitchen wisdom -and lots of jokes- as he showed us how to properly cook London Broil (shown below the the two-layered corn souffle on the side), Petite Sirloin Steaks and New York Strip Steaks. 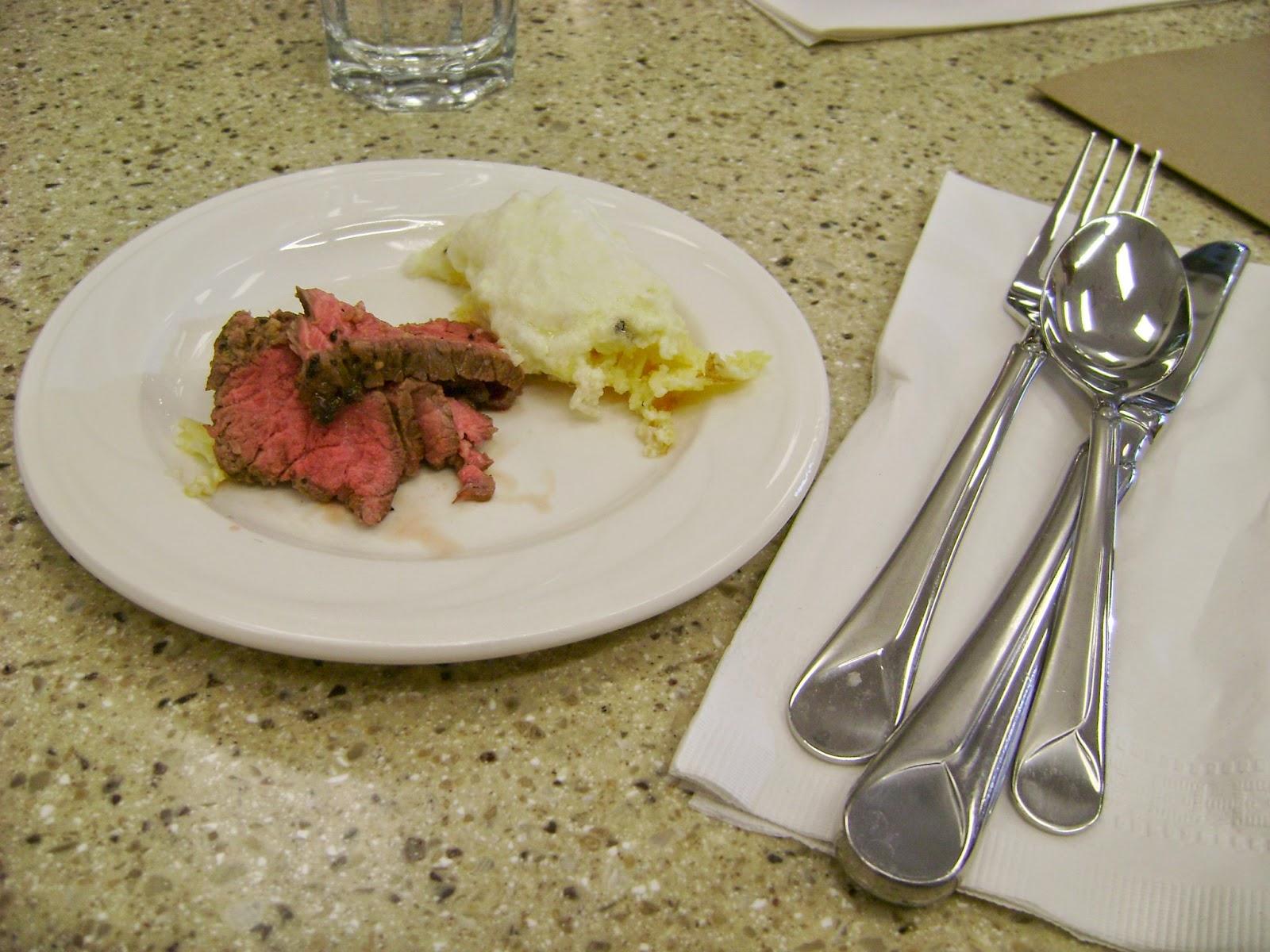 Everything was delicious and I particularly enjoyed having medium-rare meat cooked perfectly, since my Crispy Crew adheres to the well-done taste spectrum. My favorite item was the Chimichurri sauce adorning the tender grilled Strip Steaks. I never considered having such a gardeny-tasting sauce with beef, but it was the perfect accompaniment to cut some of the richness of the meat.

Overall, I was pleased with the amount of information and generous-sized tastings provided and it seems like the $20-$55 per person cooking class prices are similar to what someone would pay for a meal out at a sit-down restaurant, so having the added bonus of personalized kitchen instruction makes it a real value. 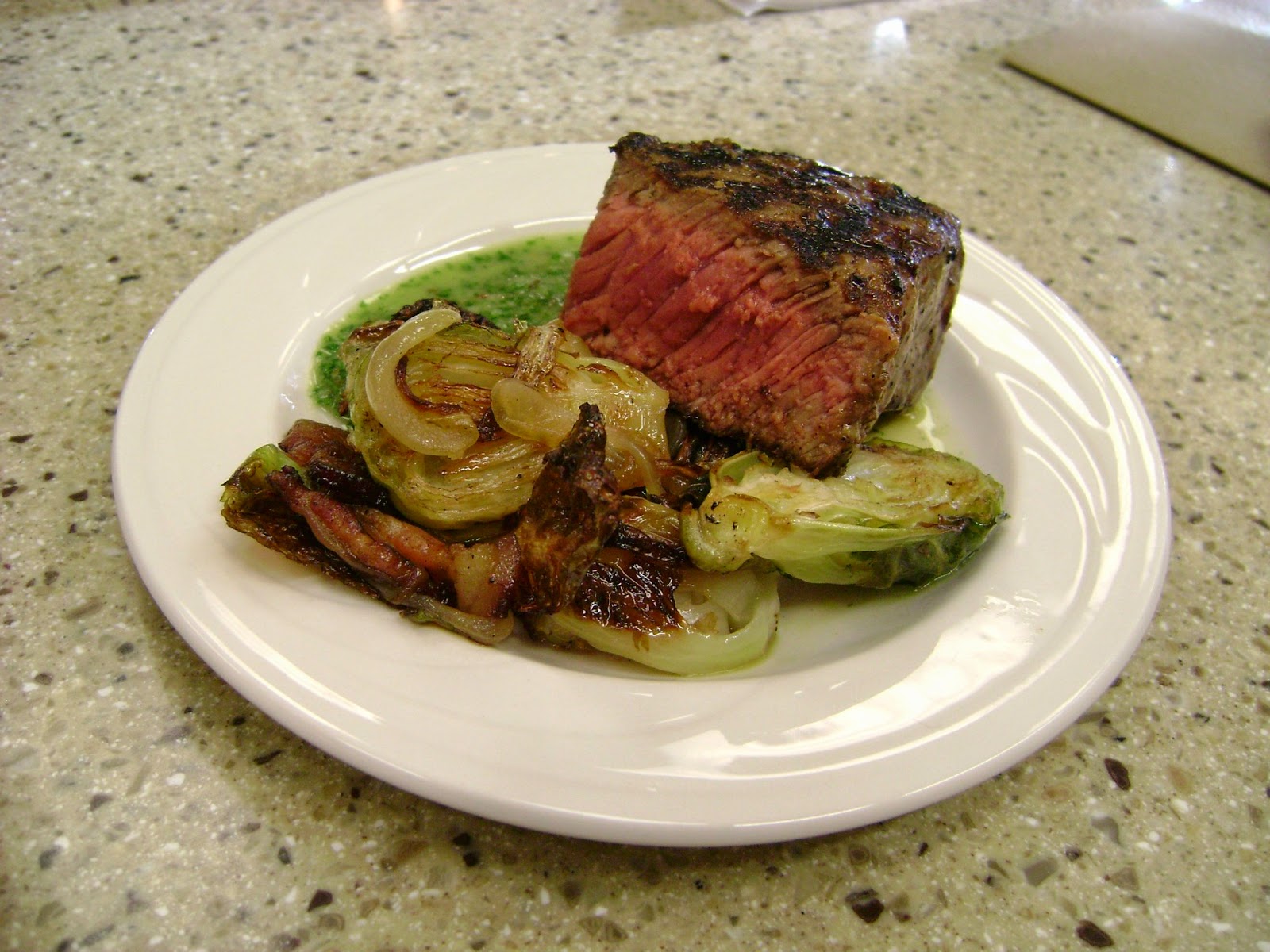 Price Chopper just started these Cooking School classes a couple of months ago, and it seems that they are really taking off. The June schedule for the Cooking School includes a nice variety of classes, many of them hands-on, including a tapas night, Chinese take-out, sushi-making, seafood grilling, and cooking classes for children. There's even a reprise of the Two Guys and a Grill class tonight at 6 pm ($40) if you would like to attend. See the Market Bistro Cooking School website for more details.

After the class I got my first look at the Market Bistro, which is like a regular Price Chopper supermarket on steroids. Every conceivable food item is on sale, from Dr. Ray's Cel-Ray celery tonic -the King of deli beverages- to an awesome array of gluten-free grocery items. I skipped over to the meat counter to get some of those strip steaks to reproduce that great recipe for my family this week and also picked up some unusual gluten-free crackers and cookies for my celiac sweetie.

**I received a complimentary invitation to attend this Market Bistro class, as well as a bag of Certified Angus Beef goodies (including an insert thermometer, which Chef Michael recommends inserting laterally through one's grilled steaks to achieve the correct internal temperature). However, I was not obligated to post a review of the Market Bistro class and, as always, my comments are completely my own.
Posted by Rachel at 2:03 PM 1 comment: