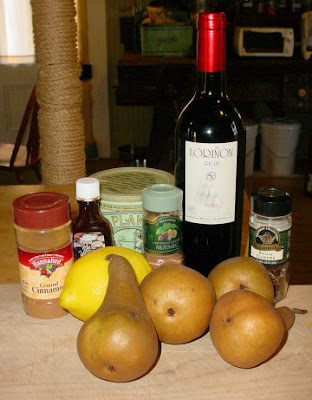 I was doubly inspired to cook up something with pears because they are the fresh produce of the month over at Marta's An Italian in the US blog, and because I saw a cool recipe for pears poached in Spanish Rioja wine in one of the new cookbooks that ambled into the bookshop and was spirited home immediately, "The Cooking Club Cookbook" (by six cute young NYC publishing industry chicks, NY: Villard, 2002).

I have never done anything with pears other than to gobble them up out of hand, so I thought I'd give the poaching recipe a whirl. The Cooking Club Cookbook shows off the once-a-month Sunday afternoon get togethers that the authors had to hone their cooking skills. They picked different themes and cuisines for the chapters in the book and the first one, a Spanish menu, had lots of great and somewhat easy-sounding recipes. The Pears Rioja called for a flambe at the end, however, and given that the Crispy Cook has curly, escapist locks and a somewhat clumsy nature, I opted not to get any crispier with that finishing technique.

I found another recipe for Poached Pears in Red Wine over at this website, but it called for a scandalous amount of wine (2 whole cups!) and I was not willing to part with that much grapery. Taking the best parts of each recipe, (in my humble virgin pear-cooking opinion) I came up with this tasty recipe. We tried it as is and it's good, but it is even more delightful as a topping for vanilla ice cream.

Cooking it filled the kitchen with an imperial and suitably autumnal spiciness and it was great to be able to go to the market and buy hard fruit that didn't need ripening before cooking. 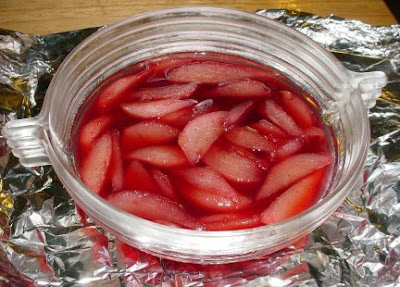 4 hard pears, peeled and cored. (I used Bosc pears and cored them easily with my apple corer)

Combine wine, vanilla, sugar and spices in medium saucepan. Bring to a boil, stirring, until sugar is dissolved. Keep an eye on the heat so it doesn't boil over. Let cook until desired syrupiness is achieved (about 10-15 minutes).

Slice pears into 1/4 inch slices. Add half of pear slices and cook over low heat, until medium-soft, about 10 minutes. Remove with slotted sp 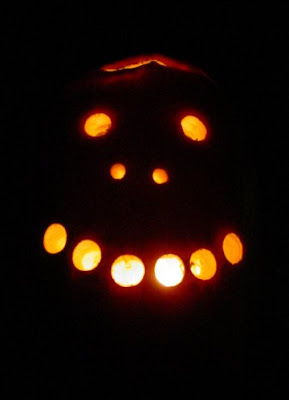 oon and add in remaining pears to cook. Add in first batch of pears and cool.

Cover and chill at least 2 hours or until cold.

Today is the last day of the Fresh Produce of the Month's pear edition, so call on Marta in the next week to see the roundup of fruity recipes.

And a Happy, Healthy and Safe Halloween to all!
Posted by Rachel at 3:25 PM

Thank you so much! I really enjoyed reading your post. :)
I'm sure the pears in Rioja were delicious! I'll put my own recipe on today or tomorrow:) And the roundup will follow soon!

FABULOUS! (and healthy, but I won't mention that part ;))

Looks delicious and I'm sure the pears taste great with creme fraiche or ice-cream.

Looks great and lots of info thanks, I will have to try it! Our members would love this site!

Pears in red wine (with quite a lot of double cream!) is one of the best desserts in the world. And one that Mr "I don't have a sweet tooth" will eat time and time again. Yours look great - and I love the happy pumpkin!

Lovely classic. I adore Rioja, but it is not easily found in Greece, so I don;t think I would use it for poaching!

I'm so gutted - I have a gorgeous pear tree in my garden, but am missing all the bounty since I've leased it out!