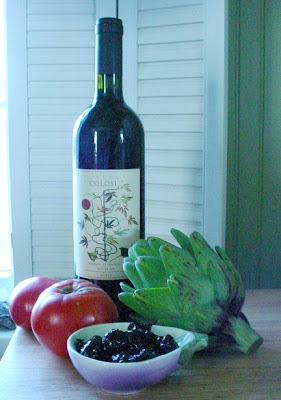 The first book selection for the new foodie book club, Cook the Books, is Lily Prior's "La Cucina: A Novel of Rapture". It features an earthy, sensual heroine, Rosa, who grows up in a Sicilian village in the Alcantara valley on the eastern side of Sicily near slopes of a volcano. There are many evocative scenes of cooking and eating throughout the book and I had a delightfully difficult time settling on the dish I would make inspired by Ms. Prior's excellent prose.

Should I make Honey Cookies like Rosa makes to assuage her grief over her grandfather's death or the panelle (fried chickpea fritters) she slips into his mouth on the morning of his funeral in a vain attempt to bring him back to life? The Sfincione (thick Sicilian-style pizza with anchovies) her Mama was making when Rosa entered the world? How about Pasta alla Norma (with fried eggplant, tomatoes, basil and ricotta), Caponata, Nucatoli (squiggly almond cookies served at Lent with dried fruit, or Pasta con Sarde (sardines)?

I considered Roasted potatoes with Rosemary, Mustazzioli (chocolate icing-covered almond and candied fruit cookies, and Toasted Bread with Melted Caciocovallo cheese and sprinkled with vinegar. I had to empty my drool bucket a few times in the planning, but ultimately I selected a "magnificent" Tonno alla Siracusa that Rosa teaches her lover, the mysterious L'Inglese, to make when they are at his friend's villa on a hot summer weekend.

In keeping with seasonal division of the book: (L'Inverno (Winter), La Primavera (Spring), L'Estate (Summer) and L'Autunno (Autumn), I put Vivaldi's "Four Seasons" on my kitchen boombox and cracked open a great Sicilian dry red wine, Colossi Sicilia Rosso, Nero d'Avola, which had a rich, mellow flavor, and assembled my supper ingredients. My famiglia was in for a feast!

I found this recipe to use as my starting point, but I thought 1/2 cup vinegar would pickle my expensive and delicate piece of tuna, so I cut that down and added some powdered cloves as noted in Rosa's cooking, so here's my tweaked version of Tonno alla Siracusa, named for the ancient Greek city of Siracusa (Syracuse) on Sicily's east coast, close to Rosa's fictional village.

****As a sidenote, here in America and especially in upstate New York, we have many towns and cities named after classical cities: Syracuse, Athens, Troy, Rome, Utica, Cairo (pronounced Kay-roh in these parts). These villages were christened during a 19th century wave of national enthusiasm for all things classical in a Greek Revival mania that you can also see in local homes and public architecture.********** 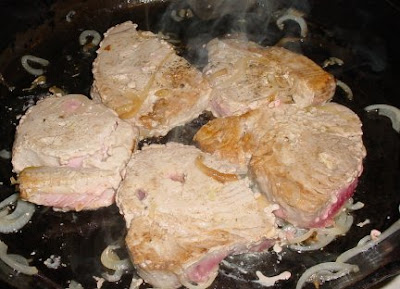 Heat olive oil in a heavy skillet. Add onion and cook until translucent, about 5 minutes. Add tuna and brown on both sides.


Stir in diced tomatoes. Cover and cook on medium heat for 20 minutes, turning at least once. I used previously frozen tuna, so I had plenty of pan juices, but if using fresh tuna (lucky you!) add a little bit of water if the pan gets too dry

While tuna is cooking, cook up your pasta, drain and toss with a little olive oil, chives and Italian parsley. Season
with salt and pepper and set aside 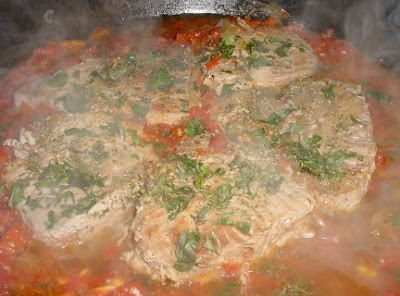 Pour vinegar over tuna, sprinkle with oregano and add salt and pepper to taste. Cook another 10-15 minutes, or until tuna is cooked through. Slice tuna and plate over herbed pasta.


The website where I researched my original Tonno alla Siracusa recipe, In Mama's Kitchen, also has an interesting article on the history and development of Sicilian cooking and many more authentic recipes, so do travel over there if your interest has been piqued in this spicy, cross-pollinated style of cuisine. You can find even more Sicilian cooking inspiration at FX Cuisine where you can learn to make Arancinis (a home cooking cult dish of fried rice croquettes), l 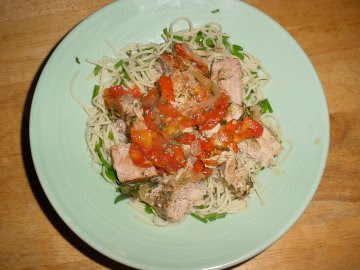 earn how to fry eggplants like a Sicilian mama, cook up tangerine sorbet, and conjure up some Drowned Broccoli, among other culinary wonders.

I hope you enjoyed dipping your wooden spoon into Sicilian cooking as much as I did. To see what other Cook the Book readers think about "La Cucina" and to suggest future book club picks, please hop over to the Cook the Books blog my cohosts Johanna of Food Junkie and Deb of Kahakai Kitchen and I have set up as our new headquarters. There is still time to participate in this first round of our book club. All you need to do is buy or borrow the book, read it and cook up something inspired by it by December 15, 2008. I will be posting the roundup of delicious "Cucina" dishes from all of the participants shortly afterward.
Posted by Rachel at 7:51 AM

I'm glad it isn't just me who's tossing around a plethora of recipes, Rachel. While I don't eat fish, your dish looks bellissimo. I'm going to check out the site you found to see if I can get past the cheese on toast.

Dear Rachel,
I'm happy you liked this book I gave you. The Sicilian recipes made me think of an anchovy and pasta dish that Marilyn's Sicilian mom once made to celebrate the feast day of St. Joseph on March 19th.Only tasted it once but would like to try making it someday.
love, mom

What a great dish, and I love this idea for a book/cooking club!

Rchel,
What a great post and dish. The tuna looks incredible. I love how you put on Vivaldi and opened the wine--way to get into it! I am still going through the recipes and ideas in my mind and you set the bar really high! (Darn you!)
;-)

That looks great. I'm going to post mine early next week. "Go Ahead Honey, It's Gluten Free" will be open through the weekend, if you're still interested

I love this! The addition of what I usually consider sweet spices like cloves and cinnamon to Sicilian cooking was so exciting for me - and your fish showcases it beautifully.

These look so appetizing!

I have to read the book on a full stomach!

tuna is one fish i've never had the pleasure of eating fresh.
the final array of the red sauce over the herby pasta looks so christmassy, it's perfect for the season at the moment