Pumpkins and gourds have never been big players in our home gardens. The vines and umbrella leaves are so huge and I've really only thought of them for table use in pumpkin pies, so I never wanted to devote a whole lot of valuable garden acreage to their cultivation. One time we had a volunteer pumpkin vine running out of our compost heap from a decaying roadside stand giant pumpkin purchase, but planting them on purpose was never considered until this spring, when the voluptuous curves of the French heirloom variety, Rouge Vif d'Etampes, made its siren song from the seed catalogue.

This heirloom variety looks like a giant red cheese and after a slow start in the wet back garden (those cucumber beetles kept bedeviling my seedlings) they took over the entire patch and were very poor neighbors to my adjacent rows of string beans and cabbages. We had a nice harvest of varying size pumpkins, and they come in an array of red, yellow and orange shades, with varying degrees of ridginess. 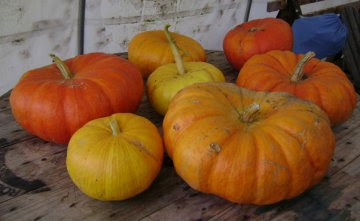 The Rouge Vif d'Etampes variety is an old French market pumpkin, so naturally they make for good eating in addition to their stylish good looks. I decided to cook up one of my best-looking monsters (and one of the biggest, weighing in at 30 pounds!) and brought this lovely pumpkin inside. 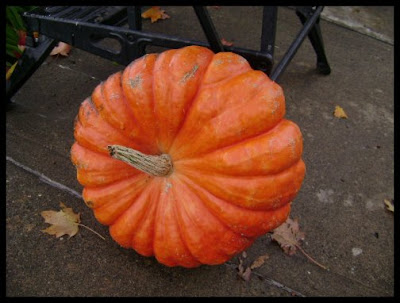 My trusty scullery hound, Martha, was a little apprehensive about this Giant Vegetable, but a little peanut butter spread on the outside eased her mind. 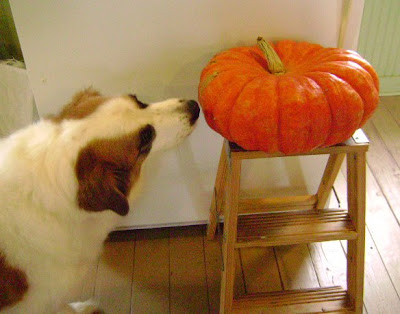 The first order of business was to wash the outside and then attempt to carve the pumpkin into wedges for roasting. This was quite a feat and worthy of a Halloween horror movie. It involved a cleaver. And my biggest kitchen knife. I thought about a machete, or perhaps a small brush chainsaw, but Martha objected. The pumpkin grinned in a terrible rictus. 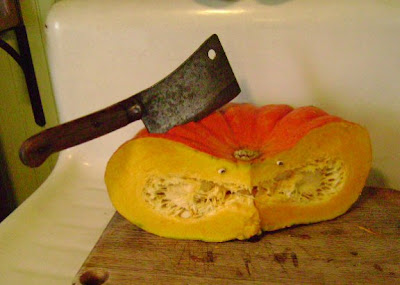 In the end, I would cleave deep into the pumpkin, then remove it and lever in my kitchen knife to hack off small wedges. The Rouge Vif d'Etampes is flattened (some might say squashed) so I found that trimming the tapered ends worked better to scoop out the seeds and strings. A grapefruit spoon was the instrument of choice for that project. I filled a roasting pan and my largest baking dish with a 1/2 cup each of water, laid in the pumpkin slices and then roasted them for 1-1/2 hours at 375 degrees F. And that only dealt with half of the pumpkin! So I repeated that process over the course of an afternoon. 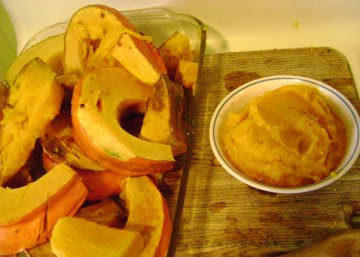 When cooled, I scooped the pumpkin flesh from the skins and then pureed it in my food processor. That 30-lb. pumpkin made somewhere just shy of 20 cups of pumpkin puree! Some went into my already-stuffed-with-garden-harvest-freezer and about half was set aside for a second day of pumpkin mania.

There is a Royal Foodie Joust underway over at the Foodie Blogroll Forum and the three ingredients which must be jousted with to create a recipe are pumpkin, dark beer and sugar. I wanted to make something savory, rather than sweet, so after perusing a bunch of cookbooks and Internet recipes for pumpkin pasta recipes, I cooked up this very elegant variation on the old comfort food standby, macaroni and cheese with a Crispy crumb topping. 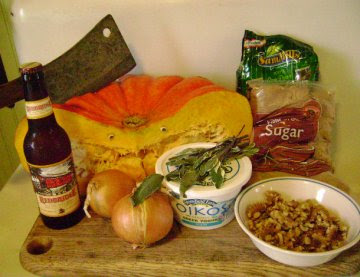 I am happy to report that this creamy, pale orange concoction was gobbled up by my Crispy Crew and was even better heated up the next day after the delicate flavors melded more. I made our recipe gluten-free with GF pasta, bread crumbs and gluten-free beer, which are now so much more readily available in local food markets. Here's my autumnal recipe:

Heat oil in frying pan. Add onions and cook over low heat until softened, about 10 minutes. Sprinkle with 1 tsp. salt and add beer. Turn up heat, bring to boil and then cook until beer is reduced by half, about 7-10 minutes.

Place walnuts, bread crumbs, and sage in food processor and whizz it up until crumbs are coarse. Season with salt and pepper. Sprinkle crumbs over macaroni in baking pan and dot with bits of softened butter.

Bake at 375 degrees F for 30 minutes, or until topping is Crispy and golden brown.

This was truly a great recipe for our family. My kids liked the familiarity of the mac n' cheese, while Dan and I enjoyed the subtle flavors of beer-braised onions, earthy sage and pumpkin. Enjoy! 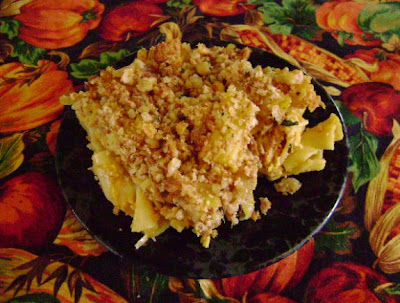 My only reservation about this recipe is that it ONLY used 2 cups of my vat of pureed Great Pumpkin, so I spent a bit of time baking stuff up the next day to use up more of my reserves. Stay tuned for more pumpkin recipes....
Posted by Rachel at 12:17 PM

First of all, those are some photogenic pumpkins. I love the color and they look fairly unblemished. Aside from pumpkin pie, I must confess I haven't really dabbled much in pumpkin. I wonder if it's sweet enough to use as a replacement for butternut squash, which I love in a risotto. As always, an informative and entertaining post. Your pooch is a cutie.

It's time for us to hit up a pumpkin patch. Fun times. This is a delicious dish. Never had pumpkin and pasta together before. Love it.

This recipe looks amazing! I can't wait to try it. I made some pumpkin soup and pumpkin muffins this last weekend, definitely in love with the pumpkin!

Love the pumpkins - so gorgeous! Pasta and Pumpkin sound like the perfect match =D.

What a lovely pumpkin harvest!
Great way to use your bounty, I love the fall flavours.

Haha nice article Crispy Cook as always :) I enjoy the pictures you took as well thanks!

What a great twist on macaroni cheese! I love chunks of pumpkin roasted alongside a lamb or beef roast, but again that isn't going to use up a lot of the crop!

Yummy!
I saw your recipe over at the leftover queen forum.
yum yum
That smiling pumpkin is so cute!
Very nice story to go along with the recipe.

This is a totally awesome entry! I love it so much! Thank you so much for participating! It really is great to have you back as a regular Jouster. I missed your creations over the summer!

I remade this recipe on December 10, 2020 and left out beer braised onions, but added in garlic powder and 2 cups of shredded Cheddar. Even more delectable. And a great way to use up Halloween and harvest pumpkins.