Cooking Along with our Local Gluten-Free Celebrity Chef, Elizabeth Barbone and a Giveaway

I first met Upstate New York's own Gluten Free cooking diva Elizabeth Barbone at a celiac support group meeting back in 2007 when I first feeling my (gluten-free) oats as a GF cook. She was a guest speaker at our meeting, and she bedazzled me with her cool purple Kitchen Aid mixer, the cookies and cupcakes she made for us to sample and her lively presentation. 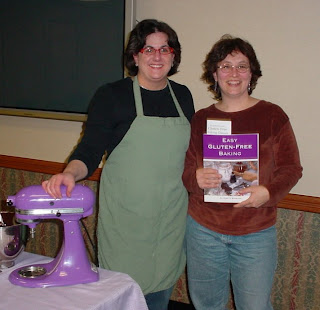 I bought a copy of her "Easy Gluten-Free Baking" cookbook on the spot and took it home to pore over and cook from. She kindly allowed me to reprint her recipe for Lemon Bars in a subsequent post, which are a pitch perfect combination of sweet and tart flavors over a buttery crust base.  I use that baking cookbook often, as it contains a lot of baking standards, from Pumpkin Bread to Brownies, and a few unusual recipes (Garlic Muffins, Hummingbird Cake) that are fun to try. Barbone's recipes don't make you crawl from market to health food store to food co-op tracking down oddball ingredients to make her recipes and her instructions are precise and have worked for me every time.

In addition to maintaining her GlutenFreeBaking website, giving GF cooking classes and demonstrations, and writing a weekly Gluten Free Tuesday column at Serious Eats, Elizabeth has been working on her second cookbook, "How to Cook Gluten-Free: Over 150 Recipes That Really Work", (Lake Isle Press, $27.95) which will be published later this month. Elizabeth sent me an email to ask if I'd join some other bloggers in a Cook Along event featuring several of the recipes from this new book and my immediate response was a high-pitched yipping that startled my sweet Martha dog awake from her guard position snoozing at my feet.

I was able to make three out of the four recipes she sent along and each one was great. I first tried out an Avocado and Grapefruit Salad with Citrus Vinaigrette and that was very tasty. I used a Pomelo, a grapefruit cousin, as I had one-half languishing from a recent Asian market field trip and that worked out really well. The Pomelo is both a bit less juicy and less sweet than a Red Grapefruit, as called for in Barbone's recipe. This was a really refreshing salad and we made it twice more when avocados were on sale at our supermarket. 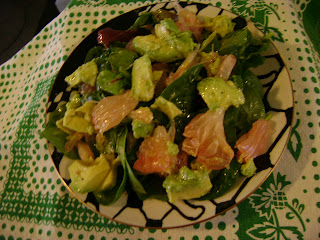 I was intrigued by the next recipe I tried, Elizabeth's No-Rise Pizza Crust recipe. Dan is usually the Pizza Maker in our house, as he has the patience for yeasty, slow food items, but since this recipe didn't call for yeast and the need for allowing the dough to rise, I forged ahead. The dough was easy to assemble and work with. I rolled it out and patted into the rectangle shape called for in the recipe and then slathered on mozzarella, Parmesan, sauteed garlic and broccoli and some spices to make a White Broccoli Pizza.

As noted in Elizabeth's recipe text, this crust can stand up to a lot of toppings, and that was certainly true as our slices buckled but didn't break under all that cheesy goodness. The crust didn't get as CRISPY as I would have liked, even baking the pizza on a heated pizza stone, so I think next time I will divide the dough in half and make two thinner, smaller pizzas. I love the ease of this recipe for busy weeknight dining, though. You can't beat slapping some pizza dough together and baking it up what my grandpa used to call a "Hot Pie", within 45 minutes. 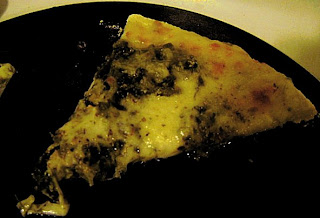 The final recipe I took out for a test drive was our favorite, Powdered Sugar Doughnut Muffins. These little mini muffins are nicely spiced with nutmeg and then rolled in powdered sugar while they are still warm. They are fantastic little sweet bites, paired with a tall glass of cold milk. Plus they are extremely cute. 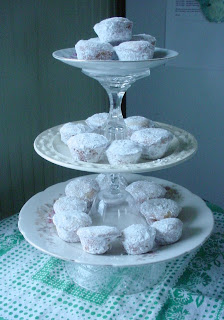 Elizabeth will be rounding up the other posts in this Cook Along to celebrate the publication of her new cookbook, so check over at her website, GlutenFreeBaking.com later to see what other people cooked up.

I am also pleased as punch to be able to offer a giveaway of a copy of Elizabeth's new cookbook to one of my Crispy Cook readers. To enter this giveaway, leave a comment below telling me about something great and gluten-free that you have recently made. You can get a second entry in this giveaway by stopping by the new Crispy Cook facebook page and liking it and then telling me that you did so in another comment. I will pick a random winner after the deadline of March 21, 2012, midnight Eastern Standard Time. This giveaway is limited to U.S. residents.

Good luck with the giveaway!

Disclaimer: I received some advance recipes from Elizabeth Barbone's new cookbook and an opportunity to offer one copy of the cookbook to one of my readers from the publisher. However, I was not obligated to post about these recipes or the cookbook and my comments about them are completely my own.
Posted by Rachel at 8:29 AM

I make a kale salad that is tasty, healty and gluten-free. In the baking department, I have two favorites, berry crumble bars and toffee bars. They are both delicous.

The last gluten free thing I made was last night. I made chicken and brussels sprouts tacos in soft corn tortillas. They were absolutely delicious!

I made Craisin White Chocolate Orange muffins this morning - just took a basic gluten free muffin recipe, added orange yogurt instead of milk, a cup of craisins, a cup of white chocolate chips, and a dash of cinnamon... Mmmmm. (and I am not usually one to experiment!)

I recently made a gluten-free version of chicken parmesan - I used freshly made breadcrumbs from gluten-free bread to coat the chicken, used gluten-free primavera spaghetti sauce, and served it over a bed of brown rice noodles. It was spectacular!

I just made some awesome gluten free banana muffins!

I recently made a GF "Funfetti" cake that Elizabeth had posted. It was a huge hit with the kiddos!!!