Dan and I are still playing around with our garden harvest of Jerusalem Artichokes, or Sunchokes. We dug up these perennial tubers last month and are storing them, after subjecting them to vigorous scrubbing to remove dirt from all their knobbly crevices, in a bag in our refrigerator vegetable drawer. We like to slice them up raw for crunchy additions to our green salads and have recently started to enjoy them roasted.

I saw a recipe for Jerusalem Artichoke Dip on the Crazy Orange Turtle blog and thought I would make a batch up for noshing in front of the Giants football game. With a few substituted ingredients and a tweak here and there, here's my adapted version, which proved to be a great dunker for corn chips and celery sticks. We even thinned the leftovers with some more olive oil and enjoyed it as a pasta sauce. It's similar to the cholesterol-laden hot artichoke dip recipe that you commonly see at gatherings (and which is awesome in SMALL amounts), but this similar spread is much more heart-healthy and full of good green vitamins so you can snack away.

Crazy Orange Turtle's recipe calls for peeling the Jerusalem artichokes after roasting, which was rather tedious, but then I remembered that we had just eaten the chokes, peel and all, after roasting, so I gave up on that and just left them with skins on. They end up being smashed around in the food processor, anyway, so my revised version calls for leaving the chokes alone.

One word of advice about Jerusalem Artichokes bears repeating, so to speak. Jerusalem Artichokes repeat, as in causing a fair bit of gas in the old digestive tract, which is a consideration if you are planning on serving them as a party dish. And don't try to preempt the problem by ingesting a couple of Beano tablets if you can't handle the gluten. I had to return a bottle of Beano after reading the ingredients label back at the Casa Crispy and finding out that wheat starch is in there. 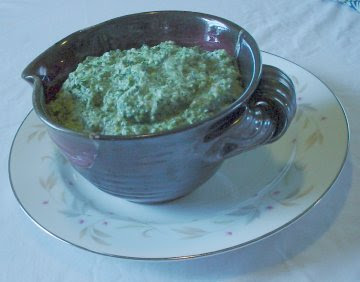 1 lb. Jerusalem artichokes, scrubbed unmercifully and cut into large chunks
1 (10 oz.) package frozen spinach, thawed
1/4 cup mayonnaise
3 Tbsp. olive oil
1/2 cup grated Parmesan or Romano cheese
3 cloves garlic, put through a garlic press or finely minced
Juice of 1/2 lemon
5 Tbsp. chopped fresh cilantro (I had some snipped cilantro in my freezer and it worked fine after I thawed it and squeezed it out a bit)

Bring 3 cups water to a boil in a small pot. Add spinach and bring to boil a second time. Drain spinach, cool, and squeeze dry.

Preheat oven to 375 degrees F. Toss artichokes with olive oil in a glass baking dish. Roast 30 minutes, or until soft when poked with a fork. Let cool and then scrape chokes and oil into a food processor or blender. Add spinach and remaining ingredients and pulse until mixture is thoroughly blended.

I am submitting this recipe to Weekend Herb Blogging, a food blogging event that highlights unusual plants and vegetables, edible flowers and of course, herbs. Jerusalem Artichokes, though native to North America, are fairly uncommon edibles, so I thought this would be an appropriate recipe to submit to Ivy at Kopiaste...to Greek Hospitality, who is this week's host. Ivy is one of the founders of Blogger Aid, a new initiative to raise funds and awareness of world hunger and I am happy to have joined this great group of bloggers. You can learn more in the Blogger Aid button on the right-hand side of the Crispy Cook. Haalo of Cook (almost) Anything at Least Once is now the headquarters for Weekend Herb Blogging and has a lovely blog of recipes and photographs.
Posted by Rachel at 1:31 PM

Thanks a lot Rachel for participating at WHB and for the lovely words you spread around for BloggerAid. I wish I could see that lovely garden of yours. The spread sounds great, perfect for the football game.

That dip sounds good. I've loved jerusalem artichokes when I've had them, but they aren't widely available here (possibly because of the gas issue).

Congratulations on winning third place in the Joust, Rachel!

Your cookies looked wonderful. You should enter the Ginger People cookie contest over at the blogroll too.

This sounds fabulous and healthy too!

Thanks everyone for your kind comments! This was really good. I love the traditional hot artichoke dip that is more common, but this is lower on the old cholesterol scale, so you can have extra dips! Plus, the Jerusalem Artichokes add a nice nuttiness.