Cook the Books: A Vegetable Navarin Inspired by Kitchen Confidential

The third book selection for the bimonthly foodie book club, Cook the Books, is Anthony Bourdain's dishy, entertaining and often over-the-top memoir, Kitchen Confidential". Jo in Athens, Greece, the blogger extraordinaire at Food Junkie, not Junk Food, is the current hostess in the lineup that includes yours truly, and Deb the adventurous foodie at Kahakai Kitchen in Honolulu. Jo picked a great book to "sink our teeth into" and one which I had read several years back and enjoyed as much again on the second reading.

Kitchen Confidential inspired a mini publishing boom among other restaurant chefs and food industry types, and I have read many, but Bourdain's vivid prose and no hold's barred writing style makes him the king of the kitchen confessional. He has written a couple of foodie/Mafioso novels, but it's his non-fiction that is the most striking. I have a review of his book, Nasty Bits, Hooves and Snouts over at the Book Trout if you want to sample more of his essays about various cuisines, food trends and restaurants.

For Cook the Books, readers are asked to come up with a blog post and dish inspired by the current book pick. There were many luscious French and Italian foods which Bourdain describes in Kitchen Confidential which I thought about making, including a CRISPY grilled whole fish, and I also toyed with the idea of actually making a luscious brunch spread that didn't just consist of chopped up bits of leftovers from the weekend dinner rush, but ultimately, I found that a passing reference to the complicated garnishes for a lamb navarin that clog up Bourdain's "meez" (mise en place) to be the impetus for my Cook the Books dish.

Since the Crispy Husband shies away from eating meat, making him one of "the enemy of everything good and decent in the human spirit, and an affront to all I stand for, the pure enjoyment of food" (Bourdain's meat-crazed, provocative definition of a vegetarian), I searched out a Vegetable Navarin recipe. I found an elegant Spring Vegetable Navarin here, but without fresh fava beans (just planted some in the Crispy Garden this week!)and other baby spring vegetables available in the local markets yet, I tweaked the recipe a bit to make do with what was in the larder.

A navarin is a French culinary term for a stew that traditionally incorporates lamb, herbs, potatoes and spring vegetables. The object is to infuse the stew with all the flavors, colors and textures of the produce without overcooking them, so it was a fun project to attempt during a luxuriously unhurried weekend afternoon. The result was quite delicious and I would even have offered a soup plateful up to Monsieur Bourdain if he had shown up at my door. I think he might even have liked it, meatlessness notwithstanding. 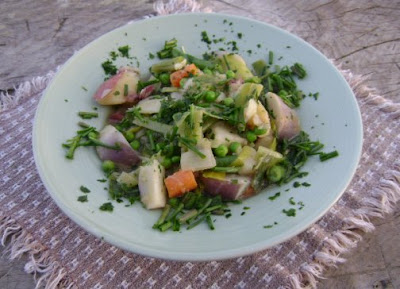 6 medium turnips, stem and root tip trimmed off and cut into six or eight wedges

Bring 3 cups of lightly salted water to a boil in a medium saucepot. Place steamer basket full of cut up turnips and bring back to a boil. Cover and steam until tender, about 10 minutes.

Remove steamer basket and dump turnips into a colander. Rinse with cold water and let drain and cool.

Place steamer basket back in saucepot and add string beans. Bring to a second boil and cover and steam 5 minutes, or until crisp-tender.

Remove steamer basket and dump beans into colander. Rinse with cold water to stop cooking and let drain and cool with the turnips.

Add carrots and leeks and simmer, covered, until carrots and potatoes are tender, about 10 minutes.

Add in steamed turnips and string beans, frozen petit pois, and salt and pepper to taste. Cook, uncovered, another 5-10 minutes, or until all vegetables are tender and broth is slightly reduced. Add in chives and parsley, reserving some to garnish each serving. Add an additional tablespoon or two of butter, if broth is not rich enough. Optional garnish of dried cow hoof (available in better pet food stores) for carnivorous rock star writer guests.

Be sure to check back at the Cook the Books blog to see the roundup of all the blog posts, book reviews and cool recipes that Jo will be putting together for us after the April 25th deadline.
Posted by Rachel at 11:05 AM

This is a great summer time grill party salad!

Great review, Rachel. You really have your work cut out for you in the kitchen, but you came up with a stylish, healthy, but delicious-sounding dish.

wow, your site is wonderful!
i will enjoy reading it!
XOXO Diet Diva!

i was wondering how you were going to cope with this book - gluten free and wheat free is not quite what anthony had in mind.

well done on your efforts!

That looks so good! Great entry. I didn't know you could buy dried cow hooves; I've only seen the pigs ears in the pet store!

Great post and such a gorgeous entry--I am sure he wouldn't even miss the meat!

What a lovely post - and a great way to celebrate spring. Bourdain would enjoy it (even if he did order it with a side of lamb just to rile you!)