Risotto with Radicchio and Roasted Garlic 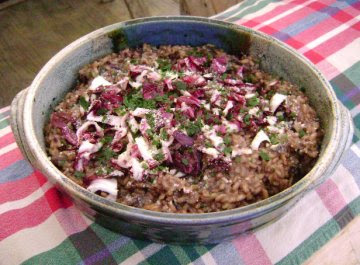 The reddish purple leaves of radicchio have always beckoned me from the produce aisle and seed catalogues, but somehow I have never played around with this pleasantly bitter Italian vegetable before. It is a beautiful deep color and makes a nice addition to green salads, both for its visual appeal and bitter, chicory-like flavor, not to mention the benefits of its high level of natural anti-oxidants. Traditional Italian preparation of radicchio includes serving it grilled, in pizza and pasta dishes and in risotto.

I was inspired to do make a radicchio risotto after watching my new favorite foodie guru, Lidia Bastianich on television visiting the vegetable markets of Treviso, where radicchio is a jewel in their culinary crown. Ever since we got our new television converter box for our rural home we've been picking up the Vermont public station's broadcasts of Lidia's Italy, so now I get to see my new kitchen hero slurping pasta, knocking back big glasses of wine and bantering back and forth with her lively mama and intelligent offspring.

When I caught the Treviso show, she went back into the kitchen with a very shy rising chef from New York City and they made a batch of risotto with radicchio and speck, a kind of Italian ham. I wanted to recreate this sumptuous sounding dish at home for my non-Speck eating husband, so I consulted various risotto recipes and came up with this version below which substitutes the richness of the meat with roasted garlic, red wine and extra grated cheese. You could use white wine instead red, but I thought the wine-tinged rice would add an extra shade of purple to the palette of cooked and raw radicchio. The result was regally good, but then again, it's hard not to get transported by a pot of slow-cooked risotto.

Below is my vegetarian version of Lidia's Radicchio Risotto recipe, suitable for those luxurious days when you can spend an afternoon adrift in the kitchen.

Risotto with Radicchio and Roasted Garlic

Drizzle garlic cloves with 2 tsp. olive oil in a glass or ceramic baking dish. Place in 375 F degree oven for 30 minutes, or until they are soft and brown. Let cool for a few minutes and then squeeze out the soft, mellow roasted garlic insides out into a dish. Let cool and reserve. (You only need six cloves of roasted garlic for this particular dish, but if you are garlic-rich, you might as well roast a whole head or two at once, since roasted garlic is wonderful added to other dishes, or squeezed warm onto bread or mixed in dips.)

Meanwhile, bring vegetable broth to a boil in saucepan. Reduce heat so that it just has the gentlest of simmers going on.

In another heavy-bottomed saucepan, heat 3 Tbsp. olive oil over medium heat. Add chives and stir 1-2 minutes, or until soft. Add rice and stir to coat each grain with oil. Rice will squeak a bit when you are stirring it. Slowly add in wine, continuously stirring, and cook until the liquid is absorbed.

Reduce heat to low and start adding ladlefuls of hot broth to the risotto pot, stirring constantly to ensure that the rice absorbs the liquid evenly. Continue additions of hot broth when the pot gets dry, stirring often, if not constantly. Constantly is better, so fortify yourself with additional red wine, if needed. Toss in roasted garlic during one of the broth additions. The whole addition of the broth process will take 20-30 minutes.

Add sliced radicchio to the pot, reserving 1 cup for later. Cook, stirring, several minutes, or until radicchio is wilted.

Take the risotto pot off the stove and mix in several tablespoons of butter, season with salt and pepper to taste, and add thyme. Mix thoroughly. Stir in 1/2 cup grated Parmesan.

Thank you Lidia, for inspiring me to play with some radicchio. It was certainly a delicious experiment and I look forward to trying it on the grill this summer.

I am sending a plateful of this delicious purple treat over to the Cabinet of Professor Kitty, an interesting blog of radio playlists, recipes and ruminations. The Professor is this week's host of Weekend Herb Blogging, the weekly blog event that showcases posts about vegetables, herbs, fruit and other members of the Vegetable Kingdom. Weekend Herb Blogging was started four years ago by Kalyn's Kitchen in Utah and is now headquartered in Australia at Haalo's lovely food and informative blog, Cook (Almost) Anything At Least Once. The recap for WHB will be up after Sunday's deadline and then I am delighted to report that I will be hosting next week's edition, Weekend Herb Blogging #180 (!), from April 20-26.
Posted by Rachel at 3:54 PM

This looks so great! I'm a huge Lidia fan, too :D

I wish we got Lidia's show here, sounds great! I haven't made a cooked dish with radicchio before... (that I can remember) what an interesting use of it, and I love the bowl!

I have never had a red wine risotto! I feel so cheated, because this looks wonderful!

I have not "cooked" with radicchio before--only salads. This looks amazing--what a great dish!

I'm making this for dinner tonight. I think I'll try to shoot it, but I don't think it will be as pretty as your picture!