Anik See's evocative collection of travel essays, "A Taste for Adventure: A Culinary Odyssey Around the World" is the present selection for the Cook the Books Club, the bimonthly online book club where participating foodies read, review and cook from the featured book. I am the current hostess for this round centered on See's wonderful book, and was delighted to recommend the book to others.

"A Taste for Adventure" is lyrically written about the author's slow bicycle journeys through a number of exotic destinations in Asia, South America and the Middle East. Often See was alone, but on several of her sojourns she was accompanied by her boyfriend Doug, and in most every destination, she and he were welcomed to feasts, personalized tours, loaded down with local delicacies and pulled into kitchens and bedrooms for respite. 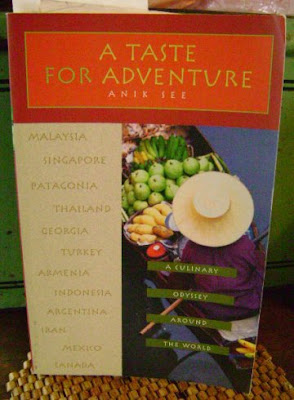 I enjoyed reading and then rereading the many bookmarked passages in See's book as her writing so vividly gave me a chance to tour remote corners of Patagonia, Georgia, Armenia, Malaysia, Iran and Argentina and several other delicious-sounding, breathtaking countries. She has a gift for making this Western-centric reader appreciate the shift when arriving in a foreign land and making sense of things. Here's her arresting, philosophical take on Thailand:

"Southeast Asia has a way of redefining things. The common misconception is that it makes you appreciate the "privilege" of being born into a western country and its potential for affluence. In fact, what Southeast Asia does is reveal the excesses of the West, of how we westerners have lost sight of the importance of simpler things in the quest for money and "meaningful" careers (as opposed to a meaningful existence), the need for a house or two or three, a car or two or three, and material possessions. Southeast Asia has a way of forcing you to define what is absolutely necessary for your survival and uncover the happiness that lies within a possessionless existence" (pp. 50-51 in my softcover copy).

The challenge for my Cook the Books post ended up trying to narrow down the particular geographic locale that I would research further. I was partial to See's description of Georgia, and the "fierce pride", contradictions of romanticism and economic desperation, high spirits, romance and chivalry and chauvinism all entwined. See was wisely accompanied by Doug on this route, which begins as they wheel their bikes out of the customs checkpoint and are embraced, kissed and laden with apples, jam and vodka by a complete stranger. At every Georgian pitstop the pair are forcefully bestowed with eggplants, exuberant greetings, more vodka, joyful, hours-long impromptu feasts, tearful departures, homemade wine, watermelons, and many, many more glasses of homemade wine.

Ultimately, I decided to dip an exploratory cooking spoon into the cuisine of Turkey, described so tantalizingly in See's book as "multidimensional, coy and luring, steamy, seductive, like nothing I have ever tasted and certainly like nothing I had ever expected" (p 96). I found some excellent introductions to Turkish cuisine at this website and then visited quite a while over at Binnur's Turkish Cookbook, where I decided to try my hand at Guvecte Mantarli Pilav, a toothsome mushroom and rice pilaf topped with a snowy cap of cooked grated potato and egg yolks. The two starches might seem a bit much combined together, but this made a great main dish supper for our family, who tucked into it before I was able to snap the requisite food porn photo. Darn! 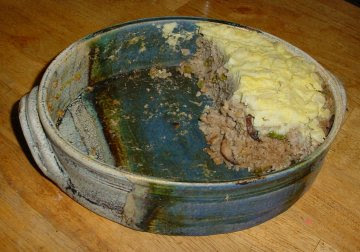 This was a great recipe, thank you Binnur! I made it with sliced baby portabella mushrooms and it was hearty and homey on a cold January evening. Even my dill-phobic daughters scarfed it up with gusto and I would recommend it to anyone interested in an introductory recipe to help explore Turkish cooking. It was an accessible-sounding casserole, sort of a riff on vegetarian shepherd's pie, but the spice and flavor combinations were just different enough to make it an exotic dish for our table.

Be sure to check back in at Cook the Books after our January 22 deadline to see the roundup of blog posts, book reviews and book-inspired recipes for our "Taste of Adventure". Until then...
Posted by Rachel at 8:28 AM

Your casserole dish is beautiful! I'm glad the family dived into the dish so we get to see more of it! I would definitely have been too scared to try the double starch - I'm glad it was such a hit in your house!

Your casserole looks as if it was delicious! ;-) At least you got a photo before it all was gone! The book was a great read. I am seriously behind but should have mine up on Thursday. ;-)

Eaten up before the photo! That is high praise indeed!

Thanks for hosting, and a great pick. Some may find it hard to believe the hospitality Anik experienced, but it is inversely proportional to the number of tourists a country gets.

Bravo!! I applaud your sense of adventure! That's what this was about! Your dish looks wonderful (and love the pottery too!) mostly eaten! Isn't that the highest praise? Thanks for hosting! And thanks for checking on me. I had a virus hit my computer system hard on the 21st and I've been fighting to restore everything until 10 pm tonight. I'm nothing if not tenacious! LOL! Thanks again!!

What a great dish Rach! I loved Anik's lyrical prose as well. It transported me to another world with her and filled my head with beautiful images.

I'm so glad you chose Turkish food. It is so well spiced and delicious!