Cooking up a pot of black-eyed peas is one of our New Year's traditions. The peas represent the promise of money to be had in the coming year, especially if accompanied by some greens. There's actually still produce hanging out in the snow-capped Crispy garden, some hardy kale plants, which are extremely tender now after many freezings and thawings, so we have still been enjoying our greens, mostly roasted and stir-fried with garlic.

I always have bags and jars of dried beans around the kitchen, but I will confess to hoarding and viewing them more often than putting them to use. Those strumpet cans of already-cooked beans have a more alluring siren song at the dinner-making hour, its' true. However, when I have the leisure of planning meals rather than flinging food at my busy, hungry teenagers, I do like to soak my own and cook up those frugal meals, so my aim is to use more of these food budget-extenders in 2010.

On New Year's Eve I made sure to soak some dried black-eyed peas in water overnight and then changed the water and simmered them until they were tender the next day. Some were accompanied with some sauteed kale (bring on those 2010 riches!) and some were left over for another concoction, which turned out to be a tremendously good pasta salad. I got inspiration from this recipe, but wanted to use ingredients which were more readily in my pantry during the winter, so I substituted frozen peppers and tomatoes from our garden, switched around some of the seasonings and came up with a version which even my eldest teen daughter, a notorious avoider of legumes, pronounced delicious. 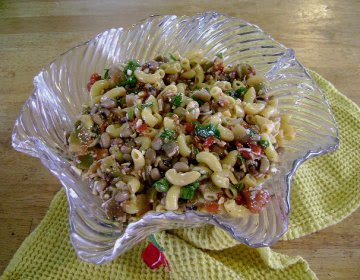 Mix pasta, black-eyed peas and cheese together in serving bowl. Mix in sauteed vegetables. Pour on dressing and toss lightly.

I am passing along a bowl of this vibrant tasting and vibrant colored salad over to the 19th Helping of My Legume Love Affair, a monthly food blogger celebration of the glory of legumes. Simple Indian Food is hosting the January round of this beany bonanza, started by Susan, the Well-Seasoned Cook. Aside from learning about various kinds of legumes and tasty ways to prepare them, My Legume Love Affair offers prizes to participants, which this month includes a calendar and a sampler of N.K. Hurst Co. dried beans.

I love pulses but for some reason I've never got along with black eyed peas. Maybe I need to revisit them!

I made black-eyed peas for the first time a few months back and we loved them. I am definitely going to use them in a pasta salad very soon. What a great idea! I can't believe you're still getting greens from your garden.

Great dish!. I want to incorporate more beans and legumes into our diet this year.

I would like you to submit this post to our Grow Your Own roundup this month! Full details here:

That looks amazing..thanks for participating

Rachel that looks so good, something i would make for lunch.

Happy New Year to you.

Pasta salad always my fav, thanks for the recipe