Like Water For Hot Chocolate: Time to Cook the Books!

Way back in the 80's, author Laura Esquivel published her glorious novel, "Like Water for Chocolate", which became a bestseller in Mexico, the U.S., and many other countries. The success of this novel, where food has magical, life-altering properties, has inspired many other authors to give chefs, food and recipes center billing in many other novels and even spawned a new subgenre of literature, the "foodie novel".

Deb of Kahakai Kitchen, my wondrous co-hostess at Cook the Books, the online foodie book club, selected this great book for our February/March round and I was delighted to transport myself back to the early 20th century Mexican ranch belonging to the de la Garza family. Mama Elena is the iron-fisted ruler over her three daughters, and decrees early in the book that youngest daughter, Tita, must never marry until after she dies.

This breaks Tita's heart, for she loves Pedro (I never did figure out why, as he just seems like a lunkhead to me), and her emotions throughout the book flow into her cooking and cause strange things to happen. Esquivel's book was the first that I know of that sprinkled recipes throughout the text, much as other novels have traditionally headed chapters with quotes from poems or other literary sources.

There were many cool recipes for dishes and home remedies in the book that could have inspired me to cook and blog them up. I considered the sensuality of Quail in Rose Petal Sauce and the Mexican holiday classic of Three King's Bread. The thought of making my own matches, however, seemed unwise (and where does one purchase minium and powdered potassium nitrate, anyway?) I found a blogging duo who actually cooked up a whole feast from the book (actually the movie version of Esquivel's book) and that seemed pretty intriguing, but ultimately I settled on making a treat of cookies and hot chocolate for my family on a blustery weekend afternoon. 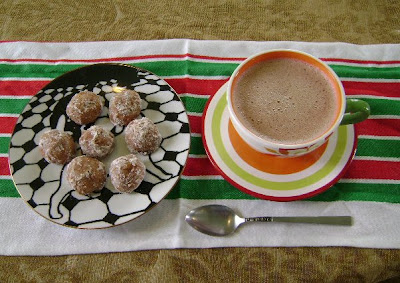 I followed my usual scratch recipe for hot chocolate from the back of the cocoa powder container (cocoa, dash of salt, warm milk and a bit of vanilla), spiced up with a hint of cinnamon. For accompaniment, I hit a bunch of cookbooks for Mexican baking recipes and chose to make a gluten-free version of Polvorones de Canela (Cinnamon Cookies) from The Moosewood Collective's cookbook "Sundays at the Moosewood Restaurant".

I 've seen recipes for similar butter cookies rolled in powdered sugar called Mexican Wedding Cookies or Mexican Shortbread (add nuts). Other cooks from other countries also make cookie cousins to these little gems: Russia has her Tea Cakes (add nuts again) , Southern American cooks make Butterballs or Snowballs, and the Germans and the Dutch make Pfeffernusse (add black pepper and/or cloves). Obviously this many wonderful cooks from around the world must be onto something.

Adaptation of recipe for Polvorones de Canela from "Sundays at the Moosewood Restaurant" by the Moosewood Collective (NY: Simon and Schuster, 1990).

Mix together sorghum flour, brown rice flour and xanthan gum. Fold into creamed mixture and mix well. Wrap in plastic wrap and chill in refrigerator for at least one hour.

Bake cookies 15-20 minutes or until lightly browned. Don't overbake as this will make them desert dry (one batch escaped my baking attentions and was terribly dry). Let cool for a few minutes and then roll cookies in cinnamon-sugar mixture while still warm. Let cool.

These are terrific served warm with hot chocolate to dunk them in. They also pair well with coffee.

If you haven't read "Like Water for Chocolate" you are in for some great entertainment. There is still time to join our online book club (the deadline is March 26 to read the book, cook something up and blog about it) at Cook the Books, where our guest judge this month is Ben of the awesome food blog What's Cooking? Ben certainly knows his way around Mexican cooking, having grown up with restaurateur parents, and he also is a fan of Esquivel's book, as noted in his review on his blog. Deb will be organizing a roundup of all the participants' posts about the book and their inspirational dishes, and then Ben will give us his thoughts. Do drop by and check it out!
Posted by Rachel at 8:34 AM

Yummy! I love anything with the words Mexican and chocolate together :)
Your post makes me want to read the book. I watched the movie for a Spanish assignment years ago, and loved it. Sounds like the book's even better!

Great review of the book and I want some cocoa and cookies right now! They look so good. ;-)

I'd like to come visit your bookstore, curl up in a comfy chair, and have those cookies with hot cocoa. It would even be worth braving the cold weather.

This is one of my favorite movies, but I'm sad to admit that I've never read the book! I'm missing out on those tasty recipes. These cookies are some of my favorites, grew up eating my grandma's version of them so they have a special place in my heart. So happy to see your gluten free version!

I really enjoyed this book-the movie was also wonderful.

This is an excellent review! I love how you describe the inception of the foodie genre. It is one of my favorite types of books to read!

These cookies and hot chocolate were a fantastic choice. I love mexican wedding cookies...especially this cinnamon-full version!

I love your review, you are always so eloquent! The hot chocolate looks delicious and so do the polvorones. A real treat on a cold day!

Hot chocolate and cookies are a great pair and a great choice, especially on a cold day. Very nice presentation of the novel!

Your Mexican chocolate sounds so easy to make and delicious, so do your polvorones. I've never had a cinnamon version and the ones my mom makes are made with lard... oh so good although not so good for your health! Hehe.

Wow...I haven't thought of "Like water for chocolate" since my Spanish-major days, which were long before I truly discovered food. Thanks for reminding me of a great read and offering a new perspective - will need to pick it up again (although maybe in English this time)