The Great Cabbage at the Crispy Casa

Until I found out that Alaskan gardeners were the champs in growing gigantic brassicas, I was quite proud of this rather large cabbage that I grew last summer. 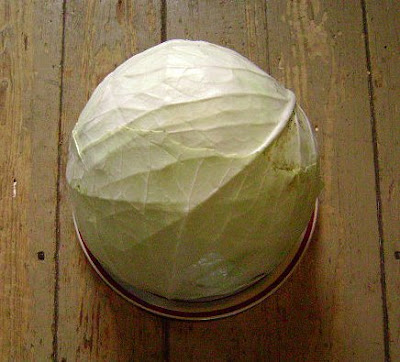 It was bigger than my cat Simon. 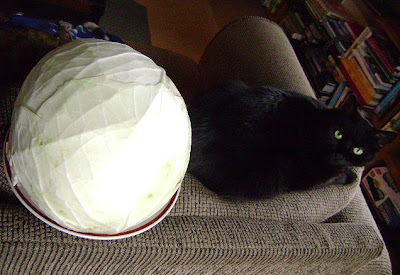 It was bigger than Lulu. 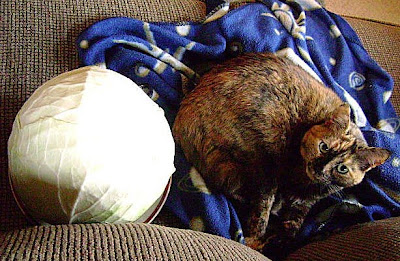 It was bigger than Martha's big, bony head. 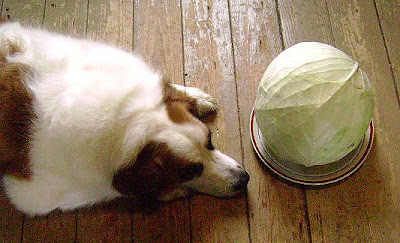 It was a great cabbage. But Alaskan gardeners, though they have a short growing season, have the perfect cool, wet growing conditions to coddle their cabbages into great big mammoths, so this honking big ball of cabbage was just a champion in my own record book.  As I recall, I did get two batches of coleslaw, a stir fry and a lovely side dish of cabbage sauteed with caraway out of that one cabbage.

Cabbage was on my mind again last week when I purchased a small head to mix into a dish that I wanted to refashion into a gluten-free version. Many years ago, I sampled a great cabbagey salad at an office potluck and got the recipe from my co-worker.  It involved some sliced cabbage, its Chinese cabbage cousin, and crushed up ramen noodles in a sesame-drenched dressing.  Tasty. 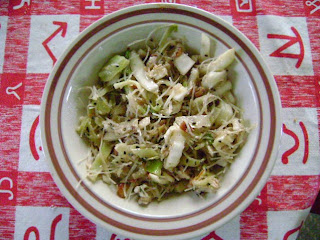 I dug out my recipe and changed it up to use rice noodles (mai fun) to make it gluten-free. I also used less butter and oil than the original recipe called for and the results turned out rather spiffy. Here then is:

Bring a large pot of water to a boil. Drop in mai fun and let soak 10-15 minutes or until they are springy but soft. Drain and chop up a bit. Mix in large bowl with cabbages and scallions.

Melt butter in frying pan and add almonds and sesame seeds. Saute until light brown and fragrant, stirring all the while so they don't burn. Add to cabbage salad.

I really loved noshing on this sweet-salty-tangy salad and will be making it for company during the warmer weather.

I am sending over this cabbagey post to this week's edition of Weekend Herb Blogging, which is being guest hosted by Anh of A Food Lover's Journey. Weekend Herb Blogging is headquartered at Cook Almost Anything and you can find out all about this veg-centric weekly blog event and the rules for posting on that terribly tasty site.
Posted by Rachel at 4:06 PM

Ha, I love all the pictures of the cabbage with the pets. Too funny. Your cats seem to be saying "lady, what do you think you're up to?" I can see it in their eyes. ;)

Love the cats as a measure of cabbage!

So funny about that salad - it's the one on the Chang's Crispy Noodles packet and I have never met anyone who didn't like it! I trek to an Australian shop just to get the right noodles!

I love the pictures of your pets :)

We just rented a garden plot and we are excited to grow some veggies this year. I think cabbage will be on the list.