I sit here stunned. Amazed that I baked up something that was not only edible, made with normally infuriating talc-like, slippery, gluten-free flours, but which looked kinda fancy; like something you might buy in a bakery. 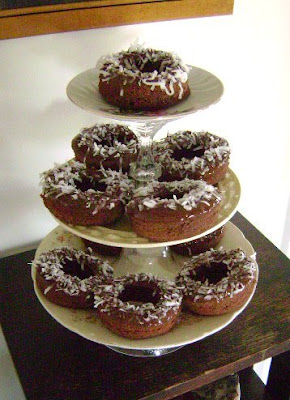 I'm talkin' doughnuts, those circular little sweeties that form two-thirds of Homer Simpsons food pyramid; those coffee break staples and snack time scarfables that bring sugar and grease together in one carb-bursting handful of deliciousness. Oh, I tried lightening up my doughnut making foray with some garbanzo bean flour, by baking rather than frying, and by substituting in coconut oil instead of other oil or shortening. But I know doughnuts are lovely indulgences that wreck hell on one's middle-aged metabolism unless you are an annoyingly lean soul such as my Old Man.

Doughnuts and fritters are this month's baking challenge at the Gluten-Free Ratio Rally, hosted this time round by Meg of Gluten Free Boulangerie. Meg has all the other links to the toothsome doughnut varieties that other GF bloggers and awesome bakers have cooked up in their kitchens, so be sure to drop by on your coffee break.... The GF Ratio Rally is built on the premise that using ratios of flour:eggs:fat:liquid and measuring by volume will produce more predictable results in baking and I am sold on the concept after successfully churning out cream puffs and cherry bublanina cake with this group.

I was thinking about maybe sitting out this GF Ratio Rally challenge this month, as my Fear of Frying and visions of ending up with a greasy pan of burnt donut crumbs was scaring me off. But then I had a sign from Saint Honoratus, the patron saint of bakers, while I was making my weekly visit to my favorite charity thrift shop. Ever alert in the housewares section, I spied my Holy Grail: a bag of what I believed to be aluminum doughnut molds (they actually produce a rather skinny, though beautifully round, donut) but which I believe now to be individual jello molds. No matter, St. Honoratus gave me the self-confidence to put these new kitchen treasures to use, and after a thorough cleaning, drying and anointing with holy oil, or rather cooking spray, they were perfect for shaping my sticky and unwieldy donut batter into perfect little cake donuts. 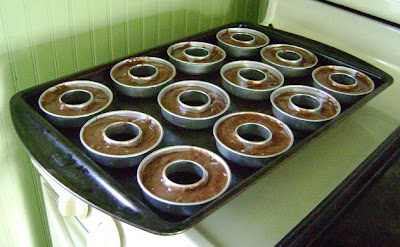 I started with this great recipe for a vegan chocolate donut from this blogger, and then adapted it to be gluten-free and to incorporate the coconut oil for my exploration into the donut zone. I thought that the garbanzo bean flour would work beautifully in a chocolate doughnut, both in terms of taste and texture, and that proved to be the case. The dough was rather sticky, as most GF batters tend to be and really dripped rather slowly and thickly from my wooden spoon into the greased donut molds. It was a messy project, but satisfying, and the gooey batter leveled itself out after a minute or so, so I didn't have to smooth it into position. 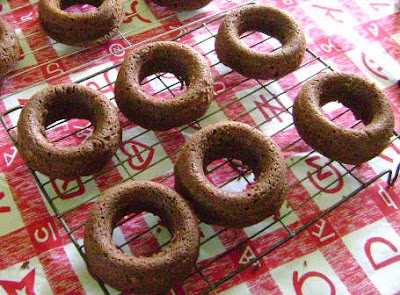 These doughnuts are cakey, rather than CRISPY, like fried doughnuts. They had a not too sweet taste and the chocolate, gooey glaze was the perfect counterpoint. With a glass of cold milk or a mug of hot coffee on the side, (and I tried out both options), this made the perfect snack/breakfast/go-to-the-gym-motivator. 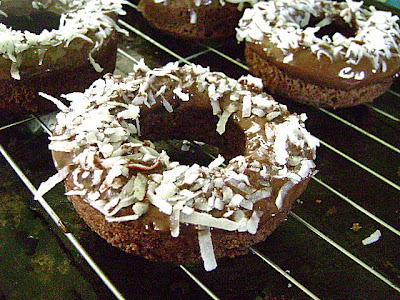 3 oz. coconut oil, (liquified if your coconut oil has gone solid in the jar)

Preheat oven to 350 degrees F.  If you own doughnut molds or donut rings/small jello molds, lightly spray them with cooking spray. If you don't own such things, try a different recipe, because this batter is too oozy for shaping freehand.

Add the  milk and vinegar mixture, coconut oil, eggs and vanilla. Mix just until the ingredients are combined.

Dribble 2 1/2 tablespoons of batter into each prepared doughnut mold. My batter was very thick and I had a lot of drips and drizzles all over the molds until I got the hang of it, so I kept a wet napkin at the ready to wipe things down.

Bake for 20 minutes. Let cool on the racks for 10 minutes. Run a knife around the doughnuts in the molds and invert them onto a baking sheet. Let cool another 10 minutes.

Make chocolate glaze by melted coconut oil over a low flame in a frying pan. Add chocolate chips, and, stirring continuously, let melt into a smooth chocolate glaze.While glaze is still warm, dip half of the doughnut into the chocolate sauce. Allow some to drip off and then dip glaze side down into your coconut or sprinkles. Let dry on a rack for at least another 10 minutes.

These doughnuts are not super-sweet like a coffee-store donut or greasy like the cider donuts you get at an apple orchard. Instead, they are more cake-like and semi-sweet like a great cake donut, but they were a stone cold delight for my family. I am envisioning making spice cake and carrot cake versions in the future, and will certainly be checking out the other GF Ratio Rally recipes that other bloggers have posted over at GF Boulangerie. St. Honoratus would want me to.
Posted by Rachel at 9:00 AM

I love that you used jello molds to make those - now that is art. Those look fantastic. I like baked donuts and I love chocolate!

Oh wow, these are so pretty. And look delicious! And they can't be too bad health-wise with the coconut oil and bean flour, right??

These look absolutely fantastic! and what a great idea to use those molds. I don't know if I'd have the patience, but I'd surely eat them if somebody else did ;P

I like the molds that you used, and the use of bean flour in the recipe. Baking donuts is definitely less messy and healthier than fried!

You use what is given to you, right?! And even though they may be jello molds they make perfect doughnuts. I love the chocolate with chocolate combination.

Yum! These do look like something you might find in a bakery! That chocolate glaze makes them look wonderfully rich.

Those do look fancy! Very nice.

Ooh, those ARE fancy! I love the coconut on top! And how great is it that you used jello molds as doughnut pans? I would have assumed they were for doughnuts, too. A much better use for them than jello, in my opinion.

They look fantastic. I use coconut oil often in my GF baking, but I'll sub in grapeseed oil if I have fussy anti-coconut diners.

mmmm these look yummy. Making me hungry. Good job :) Wish I had some molds.

These look scrumptious! I haven't had a donut in years - looks like a great recipe I'll have to try.

They look professional but I bet they taste a lot better.

Rachel, I thought of you when I was doing more research on the benefits of home-cultured kefir. I had been showing signs of lactose and gluten intolerance. Anyway, the celiac site had this thread on the subject: http://www.celiac.com/gluten-free/topic/3238-kefir/