The United States of Radish Leaves, I Mean Arugula, for Cook the Books Club

It's Cook the Books time once again and for this round of the online foodie book club, our host Johanna of Food Junkie, Not Junk Food picked a great book: The United States of Arugula: How We Became a Gourmet Nation, by David Kamp. It's a very funny, well-researched look at how American cuisine came of age in the 20th century and he shares numerous anecdotes, foot notes and social history to show all the players that have influenced the American way of cooking, eating and dining out. 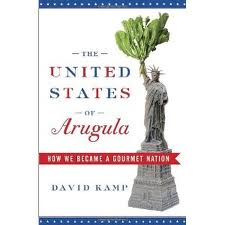 Kamp pays particular attention to the troika that are most well known for getting American food out of the canned, processed, instant, Jello-ed doldrums of the post World War II era: Julia Child, Craig Claiborne and James Beard, though there are many gossipy accounts of the minor players that had a hand in it too. I liked Kamp's descriptions of the kitchen hijinks at Chez Panisse, with doyenne Alice Waters lustily ripping through lovers and chefs with great rapidity and the story of Mexican food goddess Diana Kennedy tossing a young, creepily intense Rick Bayless out of her car after he stalked her down in Mexico and pestered her relentlessly with questions when she was having a bit of a crisis during the building of her home.

I really enjoyed reading through this book and it has earned a permanent place in my home library, where it will reread and consulted with a great deal of relish, I'm sure.

For the Cook the Books club, participants not only read and discuss the book selection, but then we get creative in the kitchen to come up with a dish that is inspired by our reading. I had hopes of picking some arugula from plants that went to seed last year, and picked a bunch to saute with olive oil and garlic and then incorporate in some sort of delicious pasta sauce. Fresh arugula is a wonderful, peppery green, but it is meltingly soft and delicious when cooked, a technique which I first tried in this terrific recipe by Mario Batali for an earlier round of Cook the Books. 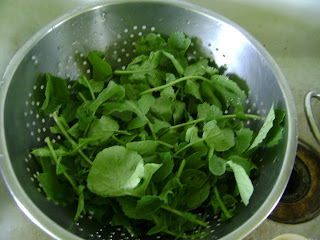 I went out to the ol' Crispy Garden and picked a mess of arugula leaves. They tasted a little spicy, but they were much, much hairier than the arugula I remembered. I rinsed them off and spun them dry and they were much harder to get clean of dirt specks than the arugula I remembered. All those hairs kept trapping little dirt bits. I looked closer. 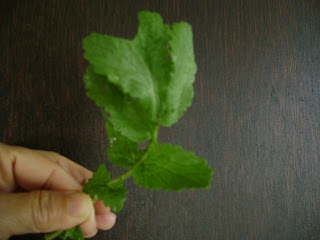 D'oh!  This wasn't arugula. These were volunteers from a red radish plant that went to seed and I let flourish in my autumn 2011 garden, thinking it would attract nice flying pollinators to my garden. Luckily, all was not lost, because I remembered reading somewhere that radish leaves were edible and actually made a good soup. I checked it out with my cookbooks and true enough, radish leaves are edible and so I cooked them up with a bit of garlic and olive oil and they were peppery, if not meltingly soft like the arugula. They had tougher stems and a more forthright peppery taste. Spring tonic and all. 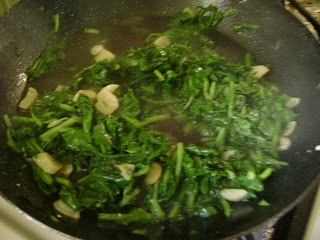 This my contribution to this round of Cook the Books. I am delighted that Johanna was able to secure Mr. Kamp himself as our book club judge so you can check back at the CTB website to see the roundup and what our esteemed author thinks about our literary and culinary comments about his work at this link.

Next round of Cook the Books will feature the first book in Laura Child's great Teashop mystery series, Death by Darjeeling, which will end on July 30th. Feel free to join in the fun by seeking out this book and then reading it and cooking up something inspired by it. Until then....
Posted by Rachel at 8:21 PM

What a mixup! You know I planted my first ever green things last month: two lavender bushes. Felt really good afterwards, must be a sign of old age :-)

We gourmet cooks excel at spontaneity, good job using what was available Rachel. I haven't cooked arugula and checked your earlier recipe. Very inspiring to do that as well as those goat cheese truffles.

We garden like that too. If it comes up, it stays. That is too funny! I have a lot of radishes in the garden now going to seed (and they also are not far from the arugula patch. I am going out now to mark the plots!

This was a great read. I don't remember the Rick Bayless episode. I will look for that on my next re-read b/c it is going into the permanent collection here too.

This is really a funny story, Rachel. I am looking now at an icicle radish that I let go to seed: we'll see if I am successful in getting seedlings. Radish greens are also nice in a frittata.

I love how you made the best of it and cooked the radish leaves--perfect for spring. ;-)

I too really enjoyed the book and will be moving it to the "to keep" shelf. ;-)

There was just so much to choose from in this book. I enjoyed it, as I did your story about the garden here! Looks good.