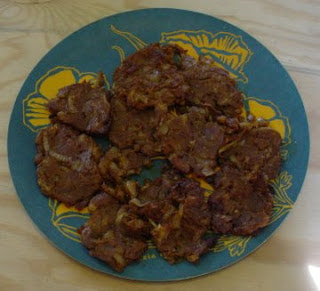 The Book of Yum is hosting an Adopt a Gluten-Free Blogger Event and I decided to adopt Jeena's Kitchen over in England. Jeena is a professional chef with a blog full of clear and detailed recipes for healthy cooking, many of which are also gluten-free, as noted in her index. She has lots of photographs to guide you through each step of a recipe, which is so helpful when you are first attempting a dish or cooking technique. Many of the recipes are vegetarian as well, and many are twists on traditional Indian recipes.

I had long bookmarked Jeena's recipe for Onion Bhajis (pronounced "bah-zhees"), which are a popular British-Indian starter in many restaurants and a close cousin of the pakora or pakoda. Typically they are deep-fried, but Jeena's recipe calls for baking. I made her recipe and everyone in the family really liked them. I have paired them with basmati rice for dinner twice now and that makes an easy meal for everyone in the family to enjoy, even my vegan teenager. Jeena's recipe directs you to drizzle oil on the bhajis midway through the cooking time, but I found that flipping them over instead worked well in my often balky oven. 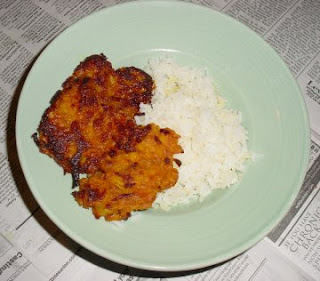 After a little bit of bhaji research, I found that they are usually accompanied by a cucumber raita or a mango chutney, so I will be whipping up some condiments for upcoming bhajimania. You can also serve bhajis on a bed of shredded lettuce with a squeeze of lemon or lime juice.

I tried making bhajis a third time with chickpea flour instead of buckwheat flour and they were even more delicious. The beaniness of the chickpea flour, which I don't fancy in my sweet treats, is perfect in this savory recipe. We're going to keep experimenting, as other bhaji recipes I've seen utilize other vegetables, such as string beans, cauliflower, potatoes, carrots, sweet potatoes, peppers, spinach and even brussels sprouts. The versatility of this recipe is exciting for me, and I can't wait to try other add-ins, like snipped chives, cilantro, mint and peas. When the garden produce starts flying in July and August, I look forward to playing around with other bhaji delights.

Vive Le Bhaji! And thank you, Jeena, for turning me on to a new family favorite recipe!
Posted by Rachel at 12:48 PM

Wow~ those look amazingly yummy! I'll be trying them, for sure. Thanks for the review!

Your bhajis look fantastic. Thank you for giving my recipe a go. :-) It is a great recipe for other vegetables also like you said, I'm happy your family enjoyed them it is so much fun to bring a plate full of bhajis to the dinner table. :-D

we used your bhaji recipe for the first time today. i dont normal like onion bhajis but these were lovely. i did change the buckwheat flour to plain flour though it still turned out fine. thank you.