The soccer game was tied and there was less than a minute left on the clock. The serious-faced girl warriors were intent on winning this first pre-season game to secure their position on the junior varsity team and show their new coach that they warranted their status as starting players in the upcoming season.

A tangle of elbows and shins spun the ball back toward the home team's goal. A burst of speed from the opponent's forward brought the ball back through the defensive line and now the action was just between the goalie and the opposing forward. They each readied for the eventual kick and it was a strong, hard one. The goal keeper sprang to block the ball and it looked like she would fend it off, but it deflected off her outstretched hands backwards into the goal in sickening slow motion. The goalie's team lost, 4-3.

It was my little sweetie, my youngest daughter, that was that heartsick goalie, and while her teammates gathered round her to comfort her on the bench while she sobbed in frustration, she would need love and time to get over this grand disappointment.

That night, after a restorative shower, nap, many hugs and many phone consultations with her soccer mates, she requested that I make "that really good corn". I was surprised that this humble sauteed corn was a favorite of hers. It's just a no-brainer "recipe" that I slap together in a hurry when I need a quick supper side dish. It's not a fancy dish and usually one I reserve for the winter when the garden season is but a memory, but you can be sure that I whipped some up to help ease the sting of the morning's defeat. 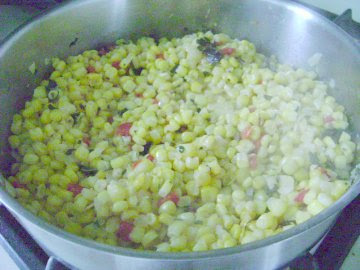 This is just a basic skillet corn recipe with some diced onion and red pepper. I threw in some chives for the green color and because I remembered the advice from "The Last Chinese Chef" by Nicole Mones, which I read recently for the Cook the Books Foodie Book Club: "For someone grieving, cook with chives, ginger, coriander, and rosemary. Theirs is the pungent flavor, which draws grief up and out of the body and releases it into the air"

You could certainly use fresh corn kernels or canned corn, but my family seems to like it best with frozen corn kernels. Something about the nubby texture, I guess. I find frozen corn and petit pois are the best frozen vegetables, as they don't get mushy or watery when you cook them up.

Here then is a scandalously easy recipe for Comfort Corn, which worked a small bit of ease into my youngest's innards and made the morning's burden somewhat lighter. The embrace she got from the classy girl who ended up as the second starter goalie on her team was even better mojo though.

Salt and pepper to taste


Melt butter in skillet. Add onion and red pepper and cook, stirring occasionally, until softened, about 4-5 minutes. Add corn and chives, and cook, stirring, until heated through. You can cover the pan once its warmed up and let it hang out until your other parts of dinner are cooked up.

Season with salt and pepper. My baby likes to add more onion powder over the top of her corn.

This comforting veggie dish is my entry for Weekend Herb Blogging #198. It is not as as glamorous as the Pickled Cauliflower recipe I originally intended for my post as host of this week's WHB round, but it seemed more needed this week. Weekend Herb Blogging is the brainchild of Kalyn's Kitchen and is now headquartered by Haalo at Cook (Almost) Anything At Least Once. I am accepting submissions until tomorrow, August 30th, at 11 am Eastern Standard Time.
Posted by Rachel at 6:52 AM

It pulls so hard at your heartstrings to see your kids learning life lessons sometimes, doesn't it? I bet this corn did lift her spirits...sounds wonderful! :D

Corn and chives go so well together, I can see why your daughter wanted this simple and delicious dish.

I am sorry about your daughter's soccer game. It is always hard to get over something like that, especially when you are a kid but I'm sure that she will come out of it a stronger person.

Poor little girl! Glad you were able to make something to warm her heart.