One of life's simple truths is that it is a magical thing to memorize a few words in another language before venturing out into new territory. Knowing how to say hello, thank you, yes, no and please really seems to be a passport into people's hearts. That simple act of cramming a little foreign lingo (aided by some hammy pantomiming) brings a lot of smiles and assistance in my experience.

This truism worked its usual charm when I recently shopped at a wonderful Ukrainian deli and market in Albany, Dnipro. Armed with my meager yet potent arsenal of Russian stock phrases, and accompanied by my friend Lisa, we sallied forth for exotic provisions for a party that night.

Shopping at Dnipro was so much fun. There is a large selection of cookies, teas, canned goods, spices, and other foods from Croatia, Israel, Poland, Ukraine, Russia, and other Eastern European countries and just scanning the colorful packaging and Cyrillic lettering is a graphic design treat. Most all packages I saw had ingredients lists in English, which is essential when shopping gluten-free and overall, I thought the prices were quite modest.

There's a refrigerator case in the back of the shop where customers were purchasing slices of luscious, cream-laden cakes and a dairy case full of interesting kefirs and cheeses. Lisa and I were lured into line by the deli counter, though. We both share a love for pickled fishes and vegetables and a taste for gustatory adventure so we were quite literally drooling by the time we were at the head of the line.

We were there on a Saturday afternoon, when the store was quite crowded, so we were mindful that we didn't want to hold things up when we began ordering. After mumbling the magic phrase, "zdravstvujjte" (which means hello, pronounced along the lines of zuh-razz-wheats-yuh), the lovely blonde woman behind the counter started offering sample after sample to us both, prodded on by the customers behind us who also directed her to give us slices of their favorite deli meats. We were the only ones who seemed to be trying to hurry things along, and it was very gracious of both the staff and customers to stuff us like the sausages behind the glass.  It was also certainly fortuitous that I remembered how to say good (haroshaw) and very good in Russian (aw-chin haroshaw) in those interludes when our mouths weren't busy chewing.

We left with a whole bag full of delicious things, from Polish cookies to spicy carrot salad, but what really captivated me was a simple tub of creamy mushroom salad. I hope to return soon to see if the Dnipro folks will part with this awesome recipe, but in the interim, I had such a hankering for it that tried to recreate it in the Crispy Cook test kitchen.

The salad had small cubes of mushrooms in what I believe was a mayonnaise dressing, with a delicate hint of onion. I really didn't detect any other clues about other ingredients, and am intrigued that such a simple combination of items could produce such a delectable treat. I did a little research in my raft of cookbooks and at the public library, but couldn't find a recipe for a traditional Russian Mushroom Salad made in this style. There were recipes for pickled mushrooms, mushrooms with potatoes and cucumbers, raw mushrooms tossed with lemony vinaigrette, mushrooms and tomatoes and so on, but nothing quite like what I had purchased. 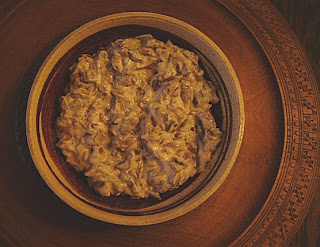 I experimented in the kitchen and came up with this very nice recreation of the earthy, yet delicate-tasting Dnipro salad, though it wasn't exactly the same. I shall have to return soon for another container of this mycological manna, but in the interim, this version makes an excellent treat for the table, slathered on some sturdy bread or eaten plain as a side dish.

Heat butter in a pan and add in garlic and onions. Cook, stirring occasionally, until they are translucent about 4-5 minutes. Add mushrooms and sprinkle with a little salt to encourage the 'shrooms to release their juices.

Cook another 10-12 minutes, stirring, until the mushroom juices are most gone. These cooked mushrooms will have absorbed all the seasonings and juices from the pan.

Let cool for 5 minutes. Season with salt and pepper and fold in mayonnaise and sour cream. Chill before serving.

I resisted the urge to zip this mushroom salad up with chopped parsley, dill or chives, because I was trying to recreate that particular salad, but I would think these would be great additions.

There's a great local blog review about Dnipro at All Over Albany, where you can find driving directions, read more about the array of smoked meats, and see photos of the front and back (the entrance is in the back) of the store's grey modernist architecture. (I'd like to think the building was appropriately Soviet Style ugly, but visit the SUNY Albany campus or Empire State Plaza and you'll see the same dreary design vibe, so it's more that it's just Rockefeller-esque). Aesthetics aside, just remember your spasibas and you'll be in like Flynn, or rather, Fyodor.

I'm sharing this recipe with Weekend Herb Blogging, a weekly blog event headquartered at Cook (Almost) Anything and hosted this week there as well.

**Don't forget that I currently have a copy of Elizabeth Barbone's newest cookbook "How to Cook Gluten-Free: 150 Recipes That Really Work" to offer as a giveaway until March 21st at midnight. To enter the giveaway, leave a comment after this recent post.
Posted by Rachel at 7:33 AM

I love anything mushroom, this sounds awesome. But you forgot to list the amount of mushrooms in the recipe. Inquiring minds want to know.

Thanks for letting me know about the omission, Kalinda. Just fixed it.

What a cool adventure. Sometimes the most intriguing foodie travels can be found in our backyards. I am going to try this salad. Thanks for experimenting and sharing! (How goes Wonka World? I about have my post ready.)