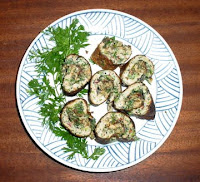 It is time for another Royal Foodie Joust over at the Leftover Queen's excellent Foodie Forum. The object of this monthly cooking challenge is to come up with a tasty recipe featuring three ingredients selected by the previous month's winner. For the July Joust, Peter of the Greek recipe blog Kalofagas, selected cilantro, seafood and sesame as the inspiring ingredients. Cilantro is certainly in harvest mode in our garden, so I was delighted with the idea of coming up with a new dish to feature its grassy, lemony taste.

Heat peanut oil in skillet over medium heat. Add omelette mixture and turn heat to low. Cook until omelette is cooked through, shaking the pan now and then to slide the omelette around, about 3-4 minutes. I used a 9 inch skillet so my omelette got a bit browner on the outside than I would have liked. I think my larger 14 inch cast iron skillet, "Big Mama", would make for a thinner, CRISPIER at the edges, lighter-colored omelette next time.

Take omelette out of the pan carefully and place on a large plate. Roll omelette up into as tight a tube as possible. Let cool.

Slice rolled-up omelette into 1 inch sections and drizzle with a little dipping sauce. Garnish with a few snippets of cilantro.

Makes a spicy breakfast for 2 or appetizers for a few more.
Posted by Rachel at 12:05 PM

That sounds just great! Good luck on the joust!

looks real good, thanks for sharing! :)

Great blog & hope to hear from you,
Monika ♥

Yum! That sounds great, and a lighter tasting version of sushi too!

Just wanted to let you know Rachel that you have been tagged at my other blog: www.2livinglightly.blogspot.com

Sounds divine. Might I suggest that you post a larger version of the photo, as I can't fully appreciate the drool-worthiness in that small size!

Lovely idea - though I'd be so tempted just to wolf down the whole thing before it was even sliced up!