Getting ready for a Superbowl party with friends when you dine gluten-free takes a bit of advance planning. The usual Superbowl fare at our friends' house where we indulge in this annual ritual of football and food is bit wheaty, so I always try to bring several things for Dan to eat, drink and share so he does not get glutened. While others are slinging down beer, pizza slices and breaded wings, I want to bring some alternatives. My hubby hates to impose on our hosts with his dietary restrictions, though they are always thoughtful in making sure he does have several tasty GF snacks.

I will be making a batch of hummus, another yet-to-be-determined GF snack from this list of lovelies and I wanted to bring some kind of hot finger food to pop in the oven when we arrived. Something cheesy and spicy, like a Southwestern twist on the ever popular mini quiche. I was inspired by my El Paso green chiles prize package, (which a lucky Crispy Cook reader will win after the Feb. 15 deadline), and a can of festive red jalapeno slices that lured me from my pantry. 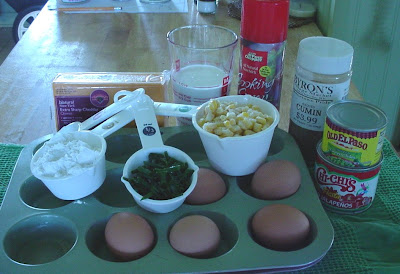 I used Gluten-Free Kay's Hot Mamas recipe and this recipe for Mini Chile Rellenos for inspiration, assembled my ingredients and had a lovely several hours of kitchen fun. Here's my recipe:

Spray 12 count muffin or cupcake pan with cooking oil. My pans are 1/4 cup so they make smaller-than-desired muffins and cupcakes, but wonderful mini-quiches. Mini-muffin pans would probably work well too, but one would need to adjust the baking time downward.

Bake in preheated 400 degrees F. oven for 30 minutes or until tops are browned and bubbling. Let cool in muffin pans for 10 minutes, then remove from pans and let cool until they are warm. Serve immediately. They are a little too moist to serve as finger food, so I served them on a plate with a little tomato salsa on the side to my taste tester.

Now, you may have noticed that this recipe bears no title. I proudly bore my creations in to my Gluten Free Superbowl Taste Tester for his review. Dan looked at my cheesy offering and grinned. 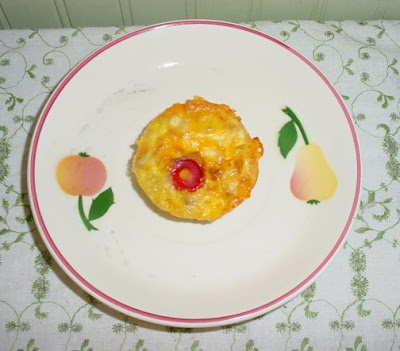 "What should I call them?", I asked innocently.

Dan merely chuckled and continued to look bemused at his plate.

Dan looked at me again fixedly. "You're kidding me, right?"

"What is wrong with this? It's good."

I gasped. And looked. And realized I had cooked up a perky, little edible breast.

"Oh man! I can't bring these guys to the party. I'll never live it down."

"No, they'll be perfect. You can say they're in honor of Janet Jackson's peek-a-boob."

Ay, caramba! That was one surreal Superbowl moment in 2004 when Jackson bared her breast during her half-time dance number. I was trying to collect my kids to start our drive home (they were younger and it is a school night, after all) and had stopped to watch the musical interlude on a couch in my friends' basement rumpus room. When the breast escaped I thought perhaps my eyes had deceived me, and turned to my compatriots on the sofa, but both young lads were aged ten and under and it didn't seem appropriate to converse with them on the subject of perhaps-imagined nipple slip. The television announcers didn't mention anything and so I went upstairs to chat with some adults about the subject.

Nobody else had paid attention to the half-time show! I was astounded and perhaps thinking that I had indulged in one too many beers. Dan drove us home and it wasn't until later when I hopped on the Internet that I found out that I wasn't delusional but had indeed witnessed celebrity nudity during America's holiest football holiday.

Back to my culinary creations. I'm of two minds about whipping up another batch of these snacks to bring to our party. Part of me is a prude: I am the Crispy Cook, not the Lascivious Chef. The other part of me would like to offer them to my (adults only) friends with a scampish wink. Dan and I certainly got a kick out of imagining many other mammalian monikers for these offerings: Boob Jobs, JJ Peekaboobs, Wardrobe Malfunctions, Tex-Mex A Cups, Cheesy Chesties, Bosom Bites, Whatever. They certainly are Hot Mamas too. 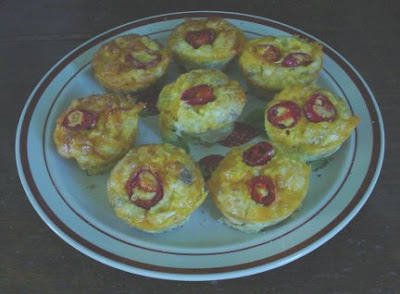 I just don't know now. I am not a young, ironic thing, so perhaps I will bring a more sedate hamper of GF goodies for my sweetie to enjoy tomorrow. These bosomy bits seem more suitable for a bachelor party or a meeting of the local La Leche League. Or maybe I'll put more than one red jalapeno adornment atop each snack to avoid the whole business entirely.

Let's just hope the members of The Who won't be brandishing their bits at tomorrow's half-time show. I don't want to have to bake up any of their septugenarian body parts.
Posted by Rachel at 7:41 AM

Honestly? I didn't think boob! I thought tasty though. I just can't believe THAT incident was 6 years ago! Where has the time gone?

This post had me cracking up! Totally something my husband would observe :)
They just look/sound YUMMY to me!!

Too funny! They look delicious but I would probably go with more than one chili too! ;-)

Figures the guy would notice the boob resemblance, I didn't, I just thought it looked yummy.

Just mailed you my entry:
http://www.ecurry.com/blog/soups-and-salads/soup/dal-palaklentils-with-spinach/

Looking forward to the round up.