Investigating naturally gluten-free foods is one way of dispensing with the frustrations of a GF diet. In Japan, there is a tradition of making mochi (pronounced mo-chee) during New Year's festivities, with families and neighbors gathering together to pound steamed glutinous rice (glutinous as in sticky, not full of gluten) in special stone mortars to make a mochi dough paste. This mochi dough is then rolled, molded and decorated into little cakes to eat and offer at Buddhist or Shinto altars.

Mochi has become wildly popular in Hawai'i as well, and there are a seemingly infinite ways of blending in various fruits, flavorings and other additions to make a beautiful rainbow of mochi. It is easy to make mochi using a box of sweet rice flour, which I have found locally in natural foods stores and Asian markets marketed as Mochiko by Koda Farms. I first saw mention of mochi when I read Victoria Abbott Riccardi's book "Untangling My Chopsticks: a Culinary Sojourn in Kyoto" and then checked out blueberry and cherry mochi recipes on The Food Librarian's blog, as well as this cool Pumpkin Mochi variation on Kirbie's Cravings.

Since I have lots of pumpkin puree in my freezer from the mammoth harvest of Rouge Vif d'Etampes pumpkins from our 2009 garden, I thawed some out and made up a big batch of these moist little rice cakes. I spiced them up with some allspice, nutmeg and cloves and they were a hit with the family. They made such a big batch, that I froze some. They are very moist and have sugar in them, so be careful to eat them quickly (I had a few that got moldy by the third day and the dog enjoyed them). 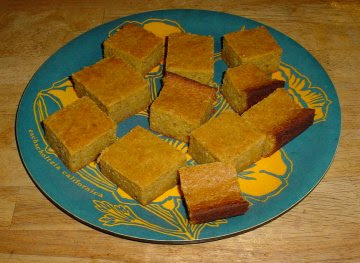 This Pumpkin Mochi is my submission to Grow Your Own, a blog event started by Andrea's Recipes and hosted this month by House of Annie, which celebrates home grown and foraged foods from around the world.

I am delighted to have discovered this Japanese delicacy and will be experimenting with other flavors in the future for sure.
Posted by Rachel at 12:54 PM

Thanks for your GYO entry. I think you have a hit with these pumpkin mochi!

How funny - as soon as I saw this I thought of Untangling My Chopsticks and her dire warnings about mochi-related casualties! I am not a huge fan of mochi, but I think pumpkin would make the texture much more appealling to me.

My husband is a huge mochi fan. We named our guinea pig mochi after the food :)! I love that you made pumpkin mochi.

The Japanese mochi sound alot like the Chinese mooncakes... served more in the fall I think. Similar deal - all good memories!