In Which the Crispy Cook Wonders, What the Heck is a Jicama?

There are many beautiful vegetables and fruits in the world but the jicama is not one of them. This tawny root vegetable (pronounced hick-uh-muh) is a boring brown blob that looks like something you'd whack off a gigantic witch's chin. Or perhaps a cow plop. Unfortunate visual associations aside, however, there is hidden inside the humble jicama a juicy, crunchy flesh that tastes to me like a turnip without the bitterness or a slightly sweet potato without the starch. Refreshing is about the best adjective for this humble tuber and I am delighted to have discovered its delights this past week. 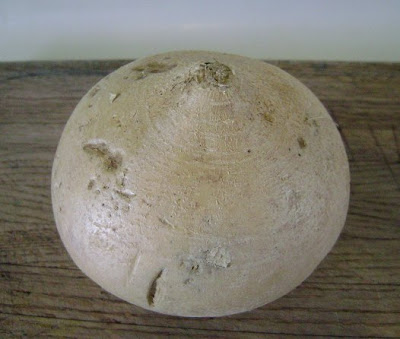 The Cook the Books Club is currently reading Laura Esquivel's bestselling foodie novel "Like Water for Chocolate", and I wanted to explore Mexican cuisine a bit before blogging up my post. My local library had a copy of Diane Kennedy's classic cookbook "The Art of Mexican Cooking", so I had a lovely couple of hours escaping to Mexico's more gentle climate while the snow and wind blew against my windows the other day. I have a number of recipes I am interested in trying out, but first I wanted to experiment with a jicama.

Jicama is the root of a native Mexican vine, Pachyrhizus erosus. The leaves and seeds are poisonous and the seeds even contain rotenone, a common insecticide ingredient, but the tuberous root is entirely edible. It has become a popular vegetable in Southeast Asia and China, going under a variety of other names, and is enjoyed both raw and cooked.

Kennedy's book had two recipes for snacks, or botanas, using jicamas. In the first, sliced jicama is topped with finely chopped onion, lime juice, toasted peanuts, chiles and crumbled queso anejo cheese. The second recipe for a Jicama Pico de Gallo was a recipe from the western Mexican region of Jalisco on the Pacific Ocean and called for a mixture of cubed jicama mixed with oranges and a spicy lime dressing. According to Kennedy, this second recipe is traditionally served with little toothpicks and a side of beer or tequila but I had plans to pair it with a rice, beans and corn tortilla casserole I had popped in the oven for our evening meal. I had to substitute some ingredients around but the result was a very refreshing, citrusy accompaniment to our meal and I offer my adapted recipe from Kennedy's book below: 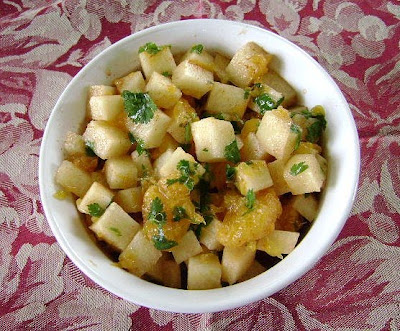 If you are interested in joining our little virtual foodie book club, Cook the Books, please do check out the book. It's a great read and then we all cook up something inspired by our reading by the deadline of March 26, 2010.

In the meantime, I am sending over this jicama post to Weekend Herb Blogging, an weekly blog event about the magical Vegetable Kingdom which is headquartered at Cook (Almost) Anything At Least Once and guest hosted this week by Dhanggit's Kitchen.
Posted by Rachel at 1:02 PM

You're bringing in the summer with this side dish. Very bright and fresh!

Jicama 1st I heard of it, nice recipe though.

Hi Rachel,Very nice and healthy recipe.This is the first time I came to know about this vegetable.Thanks for introducing it.While reading this post I came across the Virtual Cook Book.Can you please tell me about it.I would like to join.

Jicama is a somesort of yam, in India they call it 'Misrikand' and eat on fasting day!!

Friend of a Friend said...

I have been looking for a jicama recipe.. thank you SO much for posting this one!

I've never tried jicama - it sounds like it has a sort of water chestnut crispyness? I've been thinking about Mexican food too, in the lead up to Cook the Books!

Hey everyone, this was a nice summery salad to fend off the cabin fever we always feel at the end of a snowy winter.

Foodycat: This is sort of like a water chestnut. And the jicama has such a delicate taste that the other ingredients really flavor it. I still have another half left, so I'm going to play around with cooking it up in a stir fry to see how that goes.